Everything you need to know for the College Football Semifinals 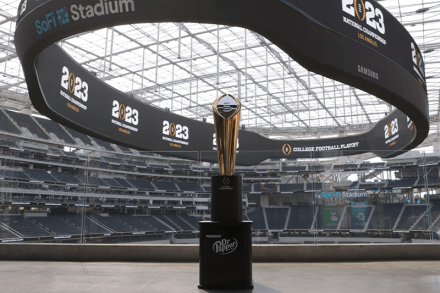 New Year’s Eve is almost here and so is the biggest day for college football. On December 31, the top four teams in college football will compete in the eighth installment of the College Football Playoff Semifinals for a shot to compete in the National Championship on Monday, January 9 at Sofi Stadium in Los Angeles.

On New Year’s Eve, number three TCU will take on number two ranked Michigan in the Fiesta Bowl as the defending National Champion Georgia Bulldogs will take on the number four ranked Ohio State Buckeyes who are looking to bounce back from an ugly end to their regular season.

Although there has been much debate on if the College Football Playoff committee should have put a team like TCU in the playoffs above teams like Tennessee and Alabama, the 2022 CFP should be one full of excitement and drama.

Let’s start with the first matchup today as the TCU horned frogs matchup with the Michigan Wolverines for a show down in the desert. Michigan opens as eight point favorites against the Horned Frogs and deservedly so. Michigan has had an incredible season that featured an undefeated 13-0 record and a second consecutive Big 10 Championship.

Even more impressive than a conference championship was the way that Michigan was able to go on the road into Ohio State as underdogs, and destroy their rival Buckeyes 45-23 that saw freshman quarterback JJ McCarthy toss for 263 yards and three touchdowns. Running back Donovan Edwards also had a standout performance as he rushed for 216 yards and two touchdowns including an 85-yard touchdown to put the game away for good. Although losing running back Blake Corrum to injury is not ideal for the Wolverines offense, Michigan is still a top team in the country and can definitely compete for a National Championship.

On the other side of the field awaits the TCU Horned Frogs who are looking to avenge their Big 12 Championship loss to Kansas State. Despite losing to a three loss Kansas State team, TCU still played an outstanding game coming up just short in an overtime thriller. As a college football fan, the TCU and K-State Big 12 Championship was one of the best games of the 2022 season thus far.

The Horned Frogs are led by quarterback Max Duggan who was a Heisman Trophy finalist after a season where he led TCU to a 12-1 record while tossing for 3300 yards and 30 touchdowns with only four interceptions. The Horned Frogs also have playmakers on offense such as running back Kendre Miller who rushed for 1300 yards and 17 touchdowns along with wide receiver Quentin Johnson who is an expected first round pick in the NFL Draft after he hauled in 53 catched for 903 yards and five touchdowns in 2022.

TCU doesn’t really have any wins that scream out they are a National Championship type of team other than a road victory against a ranked Texas team but if there is one thing that we learned about this TCU team the last few weeks is they will play you all four quarters and they will play tough. Max Duggan being able to lead this team to a CFP appearance after having heart surgery in the offseason is one of the incredible sports storylines of 2022 but I still think Michigan will pull out a win in Arizona.

Both teams play a hard-nosed type of football so I wouldn’t expect a shootout, but I do expect the game to be close. If I had to predict an outcome I would say that Michigan comes away with a 24-21 win.

The second matchup of the day features a meeting at Mercedes Benz Stadium in Atlanta as the defending champion Georgia Bulldogs are set to take on the Ohio State Buckeyes and their high-powered offense. This matchup is full of superstar NFL talent and could turn out to be one of the best CFP Semifinal games in recent history.

The Georgia Bulldogs come into the matchup as favorites for obvious reasons. The Bulldogs have essentially had the perfect season thus far going 13-0 with an SEC Championship win over a ranked LSU team. Georgia also has impressive wins including a dominant win over Tennessee who was ranked number one overall at the time, a blowout win over a solid Oregon team, and wins over South Carolina, Kentucky and Florida.

Led by Heisman candidate Stetson Bennett who tossed for 3400 yards and 20 touchdowns this season, the Bulldogs are an extremely balanced team. Georgia has an extremely talented running back by committee made up of Kenny McIntosh, Kendall Milton and Daijun Edwars where they have combined for 1900 rushing yards and 23 touchdowns this season. Playmakers like Brock Bowers and Ladd McConkey also pose a passing threat as well.

Defensively, Georgia has one of the most talented defenses in the country led by projected first round pick Jalen Carter at defensive tackle. Players like safety Kelee Ringo, defensive back Malaki Starks and linebacker Smael Mondon Jr. make this defense difficult for any opponent. This team is loaded with NFL talent and is extremely well coached.

However, so are the Ohio State Buckeyes. The Buckeyes offense is one that the Bulldogs have yet to see all season as they are led by Heisman candidate CJ Stroud who is also projected to be selected in the NFL Draft. Stroud threw for 3300 yards and 37 touchdowns in 2022 and is surrounded by talent. His biggest weapon is wide receiver Marvin Harrison Jr. who is among the best pass catchers in the nation, hauling in 72 catches for over 1100 yards and 12 touchdowns in 2022.

Not only is Ohio State loaded with firepower on offense, but they are playing with an extra spark of motivation. After a disappointing loss to their bitter rival Michigan at home, the Buckeyes hopes for a CFP spot seemed slim to none. After USC suffered a loss to Utah in the Pac-12 Championship, the Buckeyes hopes were restored and in the words of head coach Ryan Day “It felt like another shot at life”.

I think this will be an extremely interesting game and Ohio State definitely has the potential to pull off the upset if Georgia does not take them lightly.

However, the Bulldogs will essentially be playing on home-field as they are only an hour away from Sanford Stadium. I think in the first half the Buckeyes will hang around but in the end I see the Bulldogs defense taking over. I think Georgia walks out of Mercedes Benz Stadium with a 31-21 victory and will be playing for their second straight National Championship in Los Angeles on January 9.