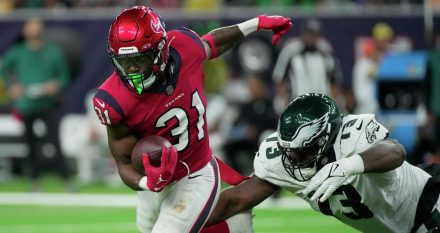 Houston Texans running back and Bainbridge native Dameon Pierce’s rookie season is coming to a close and Pierce has not only opened his hometown’s eyes, but has turned heads of NFL fans across the country. Pierce has solidified his role as the feature back in the Texans organization and is even a finalist for Offensive Rookie of the Year.

Although Pierce’s rookie season was cut short in week 13 after suffering an ankle injury in a narrow defeat to the Dallas Cowboys, Pierce has shined in his rookie campaign. Pierce is set to finish the 2022 season with 220 rushing attempts for 939 yards and four touchdowns. Pierce was a rare bright spot on a Texans team that has not seen much success in a rebuilding season in 2022. But if there is one thing that is certain, Pierce is a piece that the Texans will certainly utilize in the future and build upon.

Pierce’s NFL breakout came in week three as the Texans traveled to Soldier Field in Chicago to take on the Bears. During his third career game, Pierce broke through the hole and scored his first career NFL touchdown in a moment that Pierce and the Bainbridge community will cherish forever. Pierced finished week three with 20 rushes for 80 yards and a touchdown.

Pierce carried his momentum into the next week as the Texans hosted the Los Angeles Chargers and Pierce had his best game of his young career this time. Pierce took 14 rushes for 131 yards and a touchdown. Pierce also broke through the defense for a 75-yard touchdown run in the second quarter. The performance against the Chargers put Pierce on the map as fantasy owners across America rushed to try and acquire him for their fantasy teams.

Pierce showed consistency all year which is an incredibly promising quality for a rookie running back. In 13 games played, Pierce rushed for over 75 yards eight times which included two games for over 100 yards and three games with over 90 yards.

Something to also take into consideration is that the Texans were playing from behind a lot of the time so they would feature more passing plays than rushing. That being said, Pierce made the most of every carry. Pierce is top five in the NFL in broken tackles which shows the aggression and physicality he can bring to the running game.

Pierce’s second standout game came on national television as the Texans hosted an undefeated Philadelphia Eagles team on Thursday Night Football. Despite the Texans suffering a narrow defeat, Pierce gave the Philadelphia defense all they could handle as he took 27 carries for 139 yards including a 36 yard scamper where he shed Eagles defenders away.

For Pierce, one of the most memorable moments of the season was when Pierce ran out of the tunnel and onto the field on opening day as the Texans took on the Indianapolis Colts. Being able to step on the field was not only a culmination of all the hard work that led up to that moment, but also motivation to take the next step in his journey.

After having the opportunity to ask Pierce about that moment back in September, Pierce responded with a smile from ear to ear as he stated that it’s his motivation to be a Hall-of-Fame type of player.

As the Texans season comes to a close, Houston is in a prime position to build a winning team in the future. They sit with the number one overall pick in the 2023 draft and have many options as far as the quarterback position goes. If the Texans can land a franchise quarterback to pair with Pierce as well as fellow rookie corner Derek Stingley Jr, Pierce will be a household name for years to come.