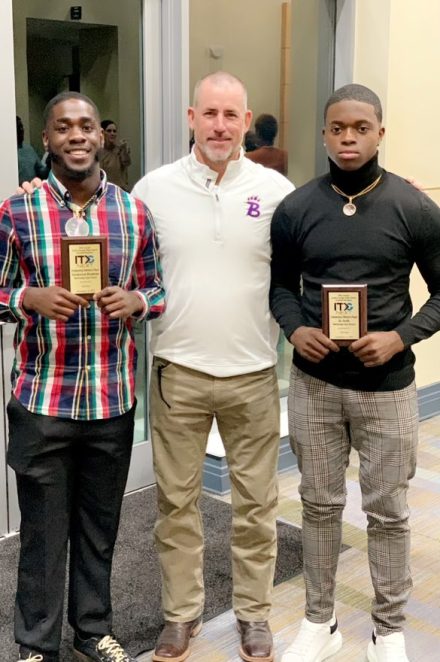 The Bainbridge Bearcats football team may not have anymore games left to play in the 2022 season, but their impact is still being felt as they are racking up individual awards and accolades after a historic 2022 season that featured a third round trip to the GHSA Playoffs, three 1,000 yard playmakers and a Region Championship.

After a 2022 season that featured over 1100 yards from scrimmage and 23 touchdowns, Bearcats running back Keenan Philips took home Region 4A MVP. Phillips was a driving force behind the second half surge that saw the Bearcats win six straight games including a region championship.

In those wins, Phillips averaged over 120 yards from scrimmage and at least two touchdowns per game. Phillips’ best game came on October 28 against Hardaway where Phillips carried the ball 13 times for 156 yards and three touchdowns in a blowout win. Phillips speed along with physical ability to break tackles and embrace contact is something that the Bearcats offense leaned on heavily this season and he is a big part of their offensive success.

Not only is Phillips a force on the field, but his work in the classroom along with his dedication to working on his craft in the weight room and film study is what sticks out to head coach Jeff Littleton and the Bearcats staff.

“Keenan is a guy who has been with us for a while and has seen our system and the way we do things here,” said Littleton. “He shows that he cares and always wants to be the best. He makes really good grades, comes into the weight room, handles his business and it shows on game days. He’s an impact player for us and so we’re expecting him to take another step next season in his senior year.”

Alongside Phillips, Bearcats head coach Jeff Littleton took home Region 4A Coach of the Year after leading the Bearcats to a 2022 Region Championship, a trip to the quarterfinals in the GHSA State Playoffs and an 8-5 overall record. 2022 was Littleton’s ninth season as the Bearcats head coach and he currently has the most wins in program history and has built a winning program at Bainbridge High School.

Although Littleton has had success at Bainbridge High School, he credits his success to everyone around him who has helped build a winning legacy in Decatur County.

“I wouldn’t say I’m the best,” said Littleton. “There are so many people who play a role in helping this program succeed. From the touchdown club helping our kids get fed and equipment and things like that to the school teachers, athletic directors and assistant coaches who make sure we are able to have game days and prepare our kids in the classroom all the way to our players. They put so much time and effort both mentally and physically all year round. Obviously we want to win, but ultimately we want to build young men and set them up to go on in their lives and find success in whatever they do.”

The 2022 season was also one to remember for Bearcats signal caller Bo Smith as he was selected First Team All-Region quarterback. Smith’s senior campaign was sharp and efficient as Smith threw for 1500 yards and 14 touchdowns with only three picks in 2022. Smith led the Bearcats offense to the third most points in school history in 2022. Smith also was able to produce with his legs as he rushed for 360 yards and six touchdowns in 2022 on top of his passing performance. His dual-threat ability alongside his decision making made the Bearcats offense hard to stop this season.

One of Smith’s elite playmakers, wide receiver Antavious Murphy, took home 2022 Region 4A Offensive Player of the Year after his junior season that saw him haul in 69 receptions for 1090 yards and 15 total touchdowns. Murphy averaged a team high 83 receiving yards per game as his breakaway speed and open field agility made him one of the hardest playmakers to bring down in 2022.

On the defensive side of the ball, senior linebacker Dontavious Broadnax alongside senior defensive lineman were named co-Defensive Players of the Year as they were the driving force behind a dominant Bearcat defense. Their physicality, leadership and smarts were qualities that made them stick out and give opponents trouble in 2022.

Broadnax was all over the field in 2022 as he accumulated 87 total tackles, four sacks, three interceptions, and two blocked punts. Something that was incredible about Broadnax’s interceptions were that he returned all three interceptions back for touchdowns which showed his ability to be an offensive threat as well.

Smart also had a career year in 2022 as he recorded 38 tackles, a career high, along with one sack, three quarterback hurries and one forced fumble. Smart clogged the middle making it extremely difficult for opponents to run the ball against the Bearcats.

Although the Bearcats would trade these awards for a State Championship trophy in a heartbeat, these accomplishments are ones to be proud of and are a testament to all the Bearcats accomplished in 2022. Coach Littleton now has his focus on 2023 and is already doing all he can to prepare his coaches and players in the offseason to hit the ground running in the summer.