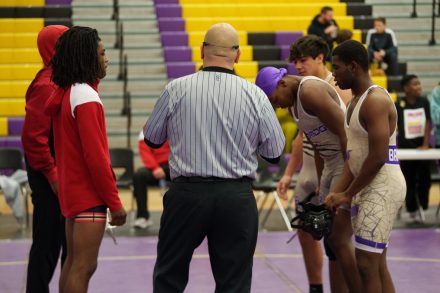 Having a home site advantage was huge for the Bearcat wrestlers and head coach Paul Coleman. Being able to compete in the same gym you practice in, in front of your home crowd and not having to travel long distances proved to be a welcoming advantage for the wrestlers.

“It felt great not having to get on a bus and travel to another place,” said Coleman. “We were able to display what an amazing gym that Bainbridge High has, as I had multiple people tell me the gym is gorgeous and loved how we had the gym set up. The opposing coaches stated they really had a great time and that they would love to come back. One fan of Chiles High stated that she wishes that all the wrestling events could be at Bainbridge. Overall it was nice to have an event at home. I could tell it lifted the spirits of many of our wrestlers, especially most of the Freshmen and Sophomores, knowing that they have home events to look forward to as I will be planning for more and more tournaments and matches for future seasons to come.”

The Bearcat wrestlers faced some tough competition on Saturday but were able to showcase their skill and toughness. The Wrestlers were divided into A and B teams and both teams were able to get matches and compete well in those matches as they went 3-1.

“The most important part of the tournament was getting everyone matches,” said Coleman. “Everyone had different talents that they were showcasing. I really can’t name any wrestler who out performed anyone else. I am extremely proud of every wrestler, because I know they each gave 100% effort. The girls were able to find wins over the other team’s girls, and most of our guys either went undefeated or only lost once. All of the Bainbridge wrestlers that competed should be proud of themselves, we did great in front of a home crowd.”

For Coleman and his wrestlers, the most memorable part of the weekend was being able to pull out a competitive win against their region opponent Hardaway. Michael Rich was able to hold off being pinned in the last match which gave the Bearcats a narrow 39-37 victory.

“I think the most memorable part of the weekend for us was getting a narrow victory over our region rivals Hardaway,” said Coleman. “I have been emphasizing how tough Hardaway will be to wrestle, over and over at every practice. It was showcased that Hardaway and Bainbridge will be at the forefront of the region. Both teams beat the other region team that showed up, Shaw. The match between Bainbridge and Hardaway ended in Bainbridge’s favor, 39-37. It literally came down to the last match. Michael Rich held off losing to his opponent by pin multiple times. The importance of me stating this is because before the final match at the 144 pound weight class that Rich wrestled for us, the score was 39-33, Bainbridge’s favor. If Michael had lost by pin, then Hardaway would have been awarded 6 team points, to move the score 39-39 and they would have had the tiebreaker ending in their favor. We improved to 4-0 within the region, and with team region fast approaching, this is one we need to remember for the good things we did, along with the correctable things that need to be addressed.”

As the Bearcat wrestlers move into the bulk of the season, they will have to remain focused over the holiday season and find ways to remain in shape. Coach Coleman is offering voluntary workout sessions over the holidays all the way up until when the students come back on January 2.

“The week of Christmas I am offering voluntary practice/conditioning sessions Tuesday, Wednesday, and Thursday,” said Coleman. “The week after Christmas, mandatory practices begin. We have mandatory practices December 27, 28, and 29. I won’t see the wrestlers again until January 2. We will practice January 2nd and 3rd. We will travel to Monroe January 4th to take on Monroe, Turner County, and Westover. Westover is a region opponent we have not seen yet, so we are excited to get a few tune up matches a few days before the region tournament. We will correct any mistakes we have from January 4th with our practices on January 5th and 6th. We will set up for the region tournament the 6th, and wrestle for the Team Region Championship January 7th at home in the BHS GYM starting at 11am.”