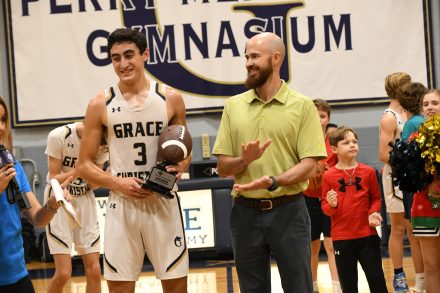 On Thursday night the Grace Christian Academy community packed the gymnasium for what many thought was another night of basketball action for both girls and boys Cougars basketball teams. Aside from both teams earning wins, the Cougar family was surprised with news that made school history.

As the halftime buzzer sounded, WTXL Sports Director Alison Posey walked out to half court with the microphone and her cameraman as she announced the GCA Cougars senior football player Kevin Brooks won the 2022 Friday Night Overtime Play of the Year.

Brooks won the award with an incredible acrobatic touchdown at GCA’s homecoming game earlier this season. Brooks is the first person in GCA Cougars history to not only be nominated for the award, but win it as a whole.

The Cougar community’s support was shown through the past months in the voting process for the award. Despite being up against larger public schools in Tallahasse and throughout South Georgia, the Cougar community compiled over 20,000 votes twice to bring the award home for Brooks.

“It really means a lot,” said Brooks. “I had a ton of people from school, people from around town and a lot of people saying they voted for me and I said thank you to all of them. It feels like a family down here. Everybody loves each other, supports each other and wants to help each other in any way they can and I am just so honored to be a part of this award.”

The students, players and crowd of GCA was unaware of the surprise of WXTL and Kevin’s award and the shock, excitement and love was encapsulated by the smile on Brooks’ face as he lifted the trophy over his head which was followed by a roar of the crowd.

The night ended with Brooks and the Cougars basketball team picking up a dominant 64-38 win over St. Teresa’s Catholic School.