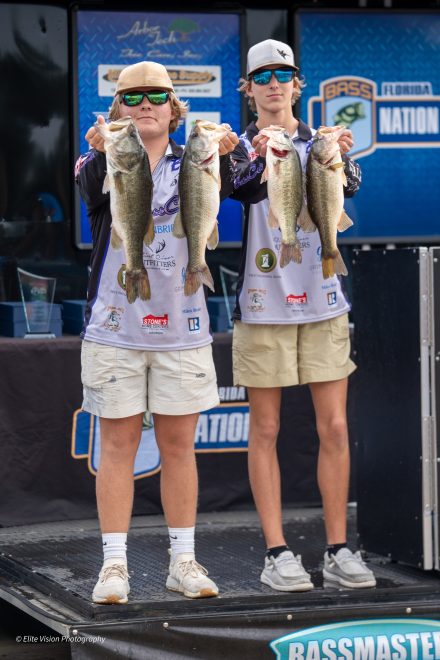 The Bainbridge Bass Cats have consistently shown success this season as they had another impressive weekend on Lake Seminole against 165 other teams. This past weekend the Bass Cats competed in the FL Bass Nation Tournament on Lake Seminole and saw three top ten finishes.

Led by Coach Roy Matthews, the Bass Cats bring a “grit” mentality to the water and are willing to grind out long days no matter the sacrifices or elements they have to battle.

“First these teams put in the time on the water and compete on the various trails throughout our area,” said Matthews.  “They are dedicated to their sport and put in lots of time and effort. Another thing these teams do well is grind through tough days on the water. They all show the grit to keep making cast and in the end the results are what they bring to the scales.”

In January the Bass Cats will begin the official GHSA Varsity Tournaments so this fall the Bass Cats have been on a mission to fine tune their skills and set themselves apart from the competition when it comes time for spring. Coach Matthews has been pleased with the improvement his team has shown throughout the fall and wants to be able to qualify as many teams as possible come January.

“So far this season we have been in the club phase,” said Matthews.  “We are seeing great results with teams fishing the Georgia BASS Nation & Florida BASS Nation Trail.

I think our Goal is to qualify as many Varsity Teams for the GHSA State Championship beginning in January, and see teams qualify for the championship on their club trails.”

Individually, Coach Matthews has been impressed with the consistency that Hayden Reynolds and Caleb Logue have shown thus far as well as the leadership that his older group of Brock Lewis and Gage Sellars who won the Region Championship last season.

“Those guys, Hayden Reynolds and Caleb Logue, along with the team of Brennan Enfinger and Corbyn Thompson were very competitive last season in our middle school program,” said Matthews.  “We are excited to see them translate that into success as they have moved up to the High School Division. We also have some solid leadership with this year’s senior team of Brock Lewis and Gage Sellars, who won the GHSA region tournament here on Seminole last season.  We are expecting big things from them this year.”

“Honestly that is a byproduct of this sport as a whole,” said Matthews. “The whole fishing community, while fiercely competitive, is also extremely generous. There are unspoken rules on the water and many traditions that all involve respect. We are fortunate to have a group of boat captains in our community willing to take these students fishing and model not only techniques but also the integrity of the sport.”