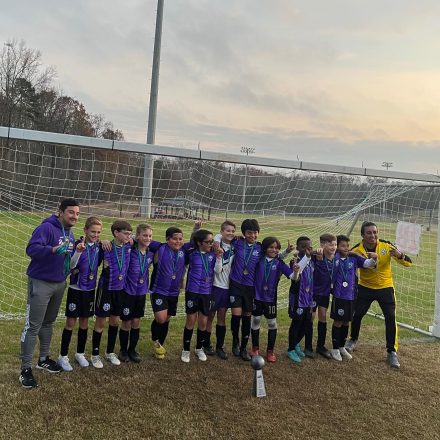 In addition to the 10U boys soccer team bringing home a state championship, the 10U girls All-Star Team received first runner up in the District. This was the second year in a row where the boys team brought home a GRPA State Championship as they successfully defended their 2021 title.

Led by Coaches Carlos Becerra and Villeser Sarmiento, the boys All-Star team was motivated to defend their title and play in their own version of the “World Cup” which has encapsulated the interest of sports fans across the world the past month.

“ The excitement to us was like winning a mini World Cup,” said coach Sarimento. “To see the work that the kids have put in all season, the commitment and sacrifices the parents have made and to see it all come together and the smiles on the kids’ faces made it all worth it.”

For Coach Becerra and Sarimento, the most rewarding part of the season was seeing the team get better each game and seeing a group so young be able to come together and develop chemistry as a team.

“The most rewarding part is seeing them develop into better soccer players every game,” said Sarimento. “Whether it be through team chemistry or individual progress. When team captain Alex Gainous received the trophy and raised it high in the air and all the kids’ faces were in complete happiness, it was such a rewarding feeling.”

This year’s boys team has been a motivating and learning experience for the coaching staff as the kids have taught the coaches many virtues such as teamwork and patience.

“This year the biggest lesson I learned was that if we slow down just a little to better explain small details on and off the field and that those small details will make a big difference in the long run,” said Sarimento. “We try to teach players that soccer isn’t just about winning. It’s about respect. Respecting teammates, opponents, any gender ,or any size. Soccer is a beautiful game with no boundaries.”