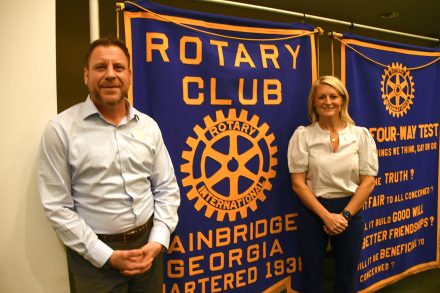 Due to Tuesday’s run-off election, the Bainbridge Rotary Club postponed their regular meeting until Thursday. Members gathered for lunch at the Kirbo Center, where the speakers for the day were Lauren Harrell and Rob Hauser, who spoke about Gentiva Hospice.

“We’ll start with the philosophy of hospice,” Harrell said. “Hospice provides support and care for persons in their last phases of an incurable disease, so that they may live as fully and comfortably as possible.” She continued, “With hospice, we remind people that death is a normal process. We affirm life, we don’t speed up or postpone.”

Harrell went on to describe Gentiva’s philosophy as an “individualized course of treatment based on the patient’s wishes”, also factoring in the family’s wishes, as well as medical and various other issues. “And really, what I have seen the most… is that we are able to alleviate fear,” she said. “There’s so much fear involved in that time period of life, and to be able to look at someone in the face, and reassure them of the process, and what it means and the team that’s gonna be caring for them, that’s been my biggest takeaway so far, is just helping people alleviate that fear.”

Harrell also discussed various misconceptions about hospice care, such as it being a specific place the elderly go to receive care, or it being expensive (according to her, most on hospice are of the age that Medicare will cover it), among others.

He also spoke on the criteria for hospice care, giving some background on the subject: “So about, it was about the late 80s, early 90s, they changed the hospice criteria,” he said. “So it used to be diagnosis driven… you have this diagnosis, the chances of you surviving more than six months are slim to none… That’s how we had to qualify patients, so a lot of patients didn’t qualify that needed it.” Hauser continued, “So they decided to revamp hospice benefits, and make it prognosis driven, meaning that there are a lot of different things that add up, to show that this patient is gonna transition untimely in the next six months.”

The par spoke at length about hospice care, and closed the presentation by taking questions from the audience.