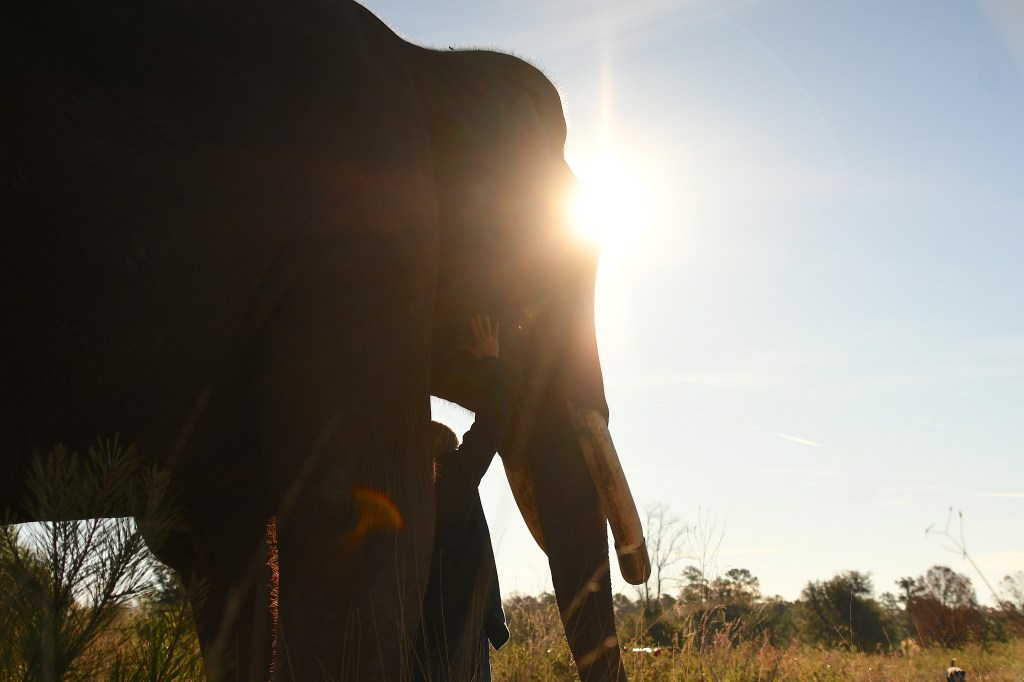 Colossal Biosciences doesn’t seem to acknowledge the wellfare of their planned mammoth hybrids. Carol Buckley, pictured above with Bo the elephant at her Attapulgus sanctuary, says that creating such an animal is “irresponsible” and “unfair to the animal.”

Well, I can’t say I’m surprised things finally got to this point. After just a few short years of hiding their de-extinction agenda behind the veil of fighting climate change, Colossal Biosciences seems to have finally dropped the charade and admitted to aiming at just being a real-life Jurassic Park.

In an interview with MIT Technology Review, Colossal’s director of species restoration, Sara Ord, was asked about Colossal’s status as a for-profit company. Despite all their claims about saving the environment and undoing humanity’s environmental mistakes, Colossal is not a charity or non-profit organization; at the end of the day, they have a bottom line to consider.

Ord briefly waffled on about how the company’s “story” would be a product, as well as FormBio, their software spin-off company, before dropping either the biggest gaffe of all time, or giving an unintentional peak behind the curtain: “And then we get to the real meat, which is the species: the thylacine or the mammoth. We are looking to partner with zoos. I think that there’s a world where we create rewilding habitats and sell tickets to go see these species in their natural area.” The interviewer followed up by asking Ord how much she would pay to see a thylacine, to which she responded, “Well, I’m putting hours and hours of my life into this. So I would honestly pay all the money in the world.” I have to assume that means she would also be willing to charge all the money in the world as well.

Colossal’s whole environmentalist angle being nothing more than a grift to cover their greed would actually make a lot of sense, seeing as their proposed ideas have seen criticism from multiple experts, while it’s mainstream media, Hollywood celebrities and vapid social media influencers singing their praises. In an excerpt from his book “As Gods: A Moral History of the Genetic Age”, zoologist Matthew Cobb stated, “What looks like a spiffy technofix might provoke excitement and attract funding from the public or mega-rich celebrities but is unlikely to be a solution to extinction for any but a tiny handful of cases.” He’s right. As I’ve previously stated, Colossal’s proposal for cloning the Tasmanian tiger (thylacine) is the only proposal of theirs that holds any potential viability. Their mammoth rewilding project is nothing but a pipe dream.

I personally got the opportunity to ask Carol Buckley, lifelong elephant expert and current CEO of Elephant Aid International (EAI), about Colossal’s mammoth-elephant hybrid plans. “Right now, currently the Asian elephant is suffering greatly, in the wild and in captivity,” she said. “The idea of bringing back an animal that went extinct, bringing it back to an environment that doesn’t even sustain the current species, I think is irresponsible, and I think it’s unfair to the animal.”

The welfare of an extinct, highly social animal, as the only one of its kind in an alien environment is something Colossal and their entourage of influencers on TikTok and Instagram don’t seem keen on addressing. Even as close as Asian elephants are to mammoths, they are still different, and come from completely different habitats. A baby mammoth-elephant hybrid needs adults to learn from; if it has an Asian elephant as a surrogate mother, it will only ever learn how to be an Asian elephant, not a woolly mammoth.

And that’s not even getting into the differences in diet: Asian elephants are tropical forest and grassland dwellers, while mammoths inhabited frozen steppes and tundras. Buckley also said that, years prior to her founding of EAI, she was approached by a scientist interested in resurrecting the mastodon, and was curious about whether her elephants would eat osage orange. This is a fruit that is not eaten by any living animals, and is believed to have been mostly consumed by mammoths, mastodons and giant ground sloths. She said her elephants wouldn’t touch the stuff. So what would a hybrid animal even be able to eat?

I think the cloning of a baby mammoth, or the creation of some hybrid, is for better or worse, inevitable. I don’t think it will happen in the handful of years Colossal promises, though, and I think it should be obvious Colossal are not cut out to be the ones doing it. They gloss over practical concerns about their methods, and ethical concerns, both for the environment, and the animals they have now effectively deemed products to be profited from. Ord’s interview really reads like it came straight out of “Jurassic Park”; they haven’t even successfully made a viable organism yet, and they’re already packaging it and slapping it on a plastic lunchbox to sell people.