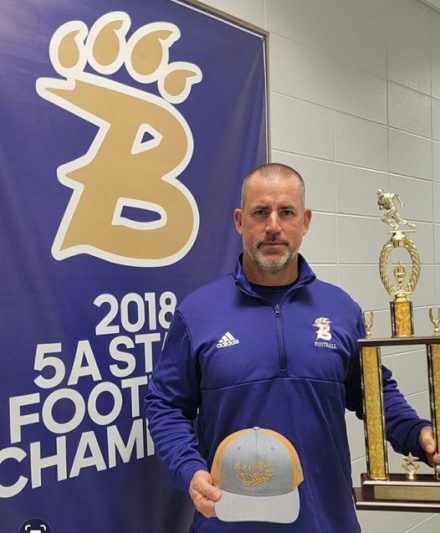 As football season comes to a close and the lights at Centennial Field fade, the Bainbridge Bearcats football team is continuing to represent the community and bring home accolades. Most recently, Bearcats head coach Jeff Littleton was awarded with the Rural Athletes Region 4A Coach of the Year after leading the Bearcats to an eight win season and a trip to the quarterfinals of the GHSA Playoffs.

The 2022 season had plenty of successful moments for the Bearcats and it all starts with Littleton and his coaching. The Bearcats are an extremely well-coached team and it shows with the way that they have been able to respond to adversity.

After a 2-4 start to begin the season, Coach Littleton was able to keep his group focused heading into region play and finish the season with a 4-0 record within their region. Not only did the Bearcats go undefeated in their region, but did so in a dominant fashion.

During their four region wins, the Bearcats averaged 45 points per game and won every game by 24 or more points. The Bearcats were able to jump on their opponents early, take an early lead and never look back.

The aggressive play, strong running attack and stingy defense is a reflection of Littleton and his staff. After each game, Littleton would emphasize the importance of playing a full four quarter game with limited mistakes and an aggressive effort and the Bearcats did that on several occasions in 2022.

One of the Bearcats most exciting wins came in the second week against Coffee high school where the Bearcats pulled off an upset with a last second touchdown. After the game, Coach Littleton spoke to the importance of being able to overcome adversity and focus on the next play.

“When you play good teams you’re going to make mistakes and we’re trying to get our guys to learn that,” said Littleton. “What’s important is focusing on the next play and doing what you’re asked. We hold our guys to a high standard and they know what the standard is and I know they are capable of that standard because I see it everyday.”

Another quality that Littleton instills in his teams is his players ability to respond to coaching after losses. Coach Littleton coaches his players hard but he knows that his players will respond. His players showed that after a 59-7 win against Westover as the Bearcats were coming off of a 2-4 start.

“Our players know what we have to do and know that we have to win,” said Littleton. “We coached them hard this week and they responded and executed. We’re going to continue to coach them up and we know they will be ready to step up and make plays.”

Coach Littleton has built a winning foundation at Bainbridge High School and has turned the football program into contenders every year. During his career at Bainbridge High School, Coach Littleton has the most wins among any coach in Bearcats history with 65, a GHSA State Title in 2018, multiple Region Championships and has given many student athletes opportunities at the next level including running back Dameon Pierce who now is an NFL starter.

The Bearcat community will continue to rally around Littleton and see success in the coming future. Littleton and the Bearcats will now prepare for a 2023 season where they will look to bring home a third state championship in Bainbridge football history.