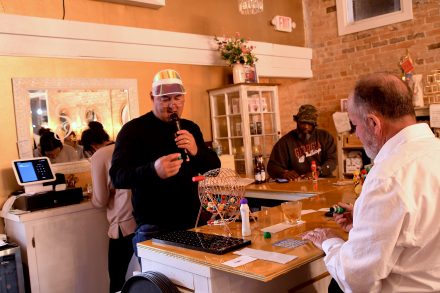 Sio’s had quite a full house on Wednesday, with people flocking back to resume bingo games. The restaurant temporarily halted their bingo games several weeks ago, after legal concerns were raised by members of the community. “We really didn’t have to,” co-owner J.D. Poole told the Post-Searchlight, “but we had heard that there were some folks around town that weren’t happy with, I guess the bingo creating a crowd or whatever.” After questions were raised over the bingo potentially being illegal, Poole stated he and his wife Siobhan researched what was and was not legal, “so we weren’t stepping on anyone’s toes.”

“So we contacted a few attorneys and looked it up, and as long as we have a non-profit organization putting the bingo on here and they are sponsoring it and they receive a portion of the proceeds, then we can continue to have it,” Poole said. This week’s non-profit partner was the Bainbridge Humane Society; Poole stated that the Friendship House and Elephant Aid International are among the non-profits that will be part of future games.

Ashley White with the Bainbridge-Decatur County Humane Society also spoke with the Post-Searchlight about the event. “We’re extremely grateful that Sio’s included us in the event,” she said. According to White, the Humane Society received roughly $245 from the event, which would go towards the animal’s expenses. She also stated that they are always in need of further donations, specifically for dry dog food and wet cat food, and requested those that could not make physical donations in person could instead donate via the Society’s Amazon wish list.

“We’re just very happy with the support of the community for Sio’s,” Poole said, “even in light of some of the disturbing competition that’s trying to throw up some hurdles for us… We just want to be able to work and prosper here just like anybody else would be able to.”

Sio’s will continue to host bingo night every Wednesday night.