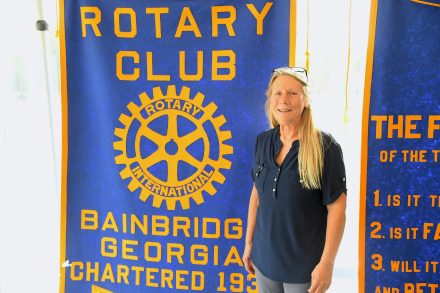 Members of the Bainbridge Rotary Club gathered at the Kirbo Center on Tuesday for their weekly meeting. This week’s speaker was Carol Buckley, founder and CEO of Elephant Aid International (EAI). Buckley had previously spoken to the Rotary club prior to the arrival of elephants at the Attapulgus sanctuary, and spoke to give the members an update.

Buckley began with a brief overview of EAI’s background. “The only project we have in the US is Elephant Refuge North America (ERNA) right in Attapulgus,” she explained, before going into EAI’s international efforts. “Prior to creating the refuge, we spent 10 years working in Asia, boots on the ground, helping needy elephants and the people who raise them, own them, use them. Our goal was to make sure the elephants were cared for properly… and that was a pretty amazing time.” According to Buckley, during that period she spent seven or eight months out of each year working in Asia, from Nepal to Vietnam.

She went on to discuss the particulars of the sanctuary in Attapulgus. “It’s 850 beautiful acres right outside of main Attapulgus. It’s a piece of property we chose after searching for almost three years.” Factors that went into choosing Attapulgus included weather, temperature, rainfall and topography, with construction beginning five years ago.

Initially the sanctuary’s first resident was slated to be an African elephant named Mundi from a Puerto Rican zoo, but the contract with Puerto Rican officials ultimately fell through and became mired in legal disputes. “There are groups that are still trying to get her out, but it’s been too long, and she’s still there,” Buckley said. “So we don’t know if she’s gonna come or not, the doors are still open for her if she can.”

This led Bo, a castrated male Asian elephant, to retire from his life in the circus to ERNA as their first resident. “He was hand-raised, always lived in a family of people, so he’s very comfortable with people,” Buckley explained. “He’s great with me. It took me a very long time to really be willing to be in trunk’s reach, because he’s huge!”

The next arrival was Tarra, Buckley’s elephant companion of 47 years. “Tarra is very independent, she’s very outgoing, she’s all those positive things that you want, very self-confident, and a bit of a loner,” she said. “She’s lived with other elephants before, lots of elephants, and she never bonded to any of them the way female elephants do. But she is bonded to Bo, she really likes him… to me that’s heartwarming, because I’ve always wanted that for Tarra, to have a good friend.”

Buckley stated there are other elephants they are considering bringing to the Sanctuary, including four of Bo’s aunts, but they are holding off until Bo and Tarra develop a stable relationship dynamic.

“Our goal is to not only to take care of the elephants that we can, but to educate about how elephants best respond in captivity, what kind of care, what kind of management,” Buckley said.

She concluded the presentation with a video virtual tour of the sanctuary, followed by taking questions from the audience.