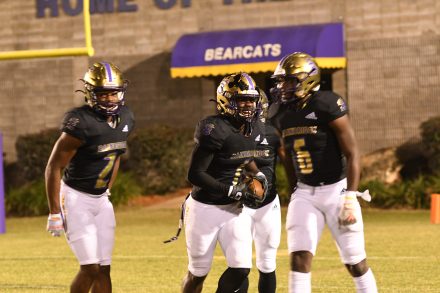 The Bainbridge Bearcats are quarterfinals bound as they shutout the Burke County Bears 44-0 on Friday night. In a night that featured an energized defensive performance and an opportunistic offense, the Bearcats showed that they are firing on all-cylinders at the right time.

On the first possession of the game, Bearcats quarterback Bo Smith made a perfect read on a run-pass option, keeping the ball and running away from the defense for a 39 yard score to give the Bearcats the lead first.

The defense brought the energy for the Bearcats all night as they held the Bears to just 29% on third down and caused 14 plays to go for negative yards. Not only did the Bearcats defensive play shut down the Bears offense, but their energy brought a spark for the entire team and gave opportunities for the offense to capitalize on.

One of those opportunities came at the start of the second quarter when the Bearcats defense forced a fumble and linebacker Dontavious Broadnax picked up the fumble and returned it 33 yards into the red zone to set up the Bearcats offense with prime field position.

After another defensive stop, the Bearcats offense began to click as Bo Smith launched a 55 yard pass to Antavious Murphy for a touchdown. Kicker Nicholas Tyre added a 25 yard field goal in the final seconds of the first half as the Bearcats went into halftime with a 23-0 lead.

Running back Keenan Phillips picked up right where he left off a week ago and sprinted down the field for a 70 yard touchdown on the second play of the third quarter. Phillips later added two more touchdown runs as the Bearcats offense cruised to a 44 point and 393 yard day.

Bearcats head coach Jeff Littleton was thrilled with the way his defense competed on Friday but also knows that this is the standard they need to play to in order to bring home a State Championship.

“Coming off of last week we felt like we left a lot on the table and didn’t play as well as we could have,” said Littleton. “We went to work this week and tried to make our fits better defensively and I think we accomplished that tonight but I know that we need to keep playing that way and bringing the energy.”

Next up for the Bearcats is a quarterfinals matchup with Cedartown High School, who is an extremely talented and accomplished program. Despite the Thanksgiving holiday impacting the school schedule, Coach Littleton has his players focused and ready to come out and compete on Friday.

“We’re used to doing this and playing games during the holidays,” said Littleton. “Our seniors have done it three times. I told them in the huddle after the game, they know the standard. Our coaches push them everyday to get better and they push themselves to get better. It’s part of the process and our kids live it.”

The Bearcats will be back home for their third consecutive home playoff game this season at Centennial Field at 7:30 p.m. on Friday, November 25.