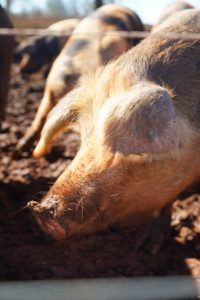 In the counties of South Georgia, farms that have hogs are few and far between, but at one time, just about every farmer had a few hogs or many. Pork was an important part of the southern diet. We had a nice herd on the farm where I lived and grew up.

My brother and I have shoveled many an ear of corn into what was called a corn crib. As soon as we filled the crib up with corn, the next job was to empty it as we shoveled the same corn onto the ground of the barnyard for the hogs to eat. Trying to explain that to today’s young people would be as hard as them trying to explain to me the workings of a computer.

A single family, unless it was large, wouldn’t attempt the job of hog killing all by itself. It was more of a community thing. And it was hard work, although I was of the age where I didn’t have a lot to do with it. It took men who could handle the dead weight of a two hundred pound animal.

First of all, the weather had to be chilly. The weeks between Thanksgiving and Christmas, back then, seemed to be colder than now and that was a good time to kill a hog. Refrigeration was not as easy to find and warm weather could be a problem for pork. Plus, those holidays called for a ham.

The animal selected for slaughter was sometimes separated from the rest and a special diet chosen so that his innards might be cleaner. I won’t emphasize the manner of death, but suffice it to say, the hog was killed. That made the rest of the work easier. Ever try to skin an “alive” hog?

A large 50 or 60 gallon, cast iron cauldron of boiling water was available and the hog was dipped in the cauldron and then removed for the scraping of the hide to remove the hair. An old saying is that the only part of the hog that escaped was the hair and the squeal.

After the hair had been scraped and the hog was clean, it was hung up by the ligaments of the hind legs. In our case, we used a tree limb that could support the hog. Then it was cut from head to tail and the innards would be removed and saved for further work. Just about all of the hog was used for something. Ever hear of the dish “brains and eggs?”

The cutting of the hog into its different elements called for large and sharp knives. I guess that’s when the name of the “butcher knife” was born.

Some of the parts of the day I had no interest in. Like the cleaning of the intestines for the making of chitterlings, also known as “chitlins.” The casing was also used for sausage.

Since refrigeration and freezers were not so common, much of the meat was salted and prepared for smoke houses. My granddaddy had a smoke house and I can remember going with him and seeing him cut off part of a ham and also get some bacon. That home-smoked meat tasted so good.

Sometimes we walk into areas where we say, “It’s so cold in here, you could hang meat.” Now you know why we say that. Hog killing weather is cold weather.