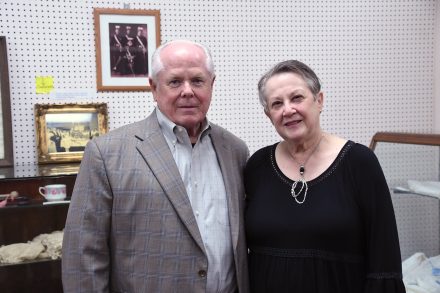 A crowd gathered in the Decatur County Historical and Genealogical Society Museum on Monday night. Rather than having the usual quarterly dinner, the Historic Society held a showcase of personal articles from John W. Callahan, one of Decatur County’s prominent citizens in the early 1900s.

Callahan was the operator of the steamboat line on the Flint River, and was influential in many other areas and industries as well. According to president Rosalyn Palmer, many of the items were purchased by the museum in an estate sale, while others were on loan from the Callahan family. Some of these items included an old trunk, a large family Bible, a crate used for storing table leaves, family pictures, as well as some of Callahan’s clothes.

A descendant of Callahan was also present at the evening’s event. Wesley Callahan Hargrave is Callahan’s great-grandson, and while he never met Callahan in person he learned about him through his grandmother, Willie May Callahan, Callahan’s daughter. While he spends much of his time in Atlanta, Hargrave grew up in Bainbridge, and still has a home here he returns to. “This home we have here has been in the family since 1920,” he said, “which was my grandmothers… then my mother moved in, and now we have it.” According to Hargrave, the Historic Society approached him about attending the event. “Rosalyn sent me an invitation, and when I got it, I told her I would not miss it, I wouldn’t want to miss it for the world.”

“I’m proud that they have the exhibit, of course,” Hargrave continued. “I’m proud to be related to him, and I’m proud of being named after him. I’m proud that I’ve kept the things I’ve inherited through the years… I’ve just got a lot of history here, and I love the people of Bainbridge.”

In a statement to the Post-Searchlight, Rosalyn Palmer thanked those that sponsored the event: “The reception was made possible through the generosity of the Edward C. Fogg III and Lisbeth A. Fogg Charitable Trust.”