Bearcats advance to second round of GHSA Playoffs 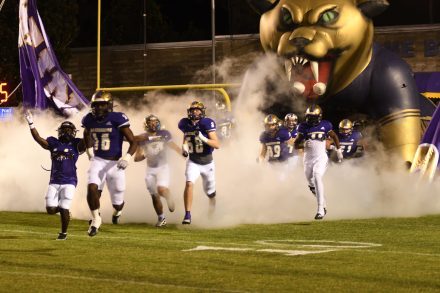 The Bainbridge Bearcats football team continued their hot streak on Friday night as they opened the first round of the GHSA Playoffs with a crushing 58-20 win over the Baldwin High School Braves. Led behind a stellar run game and aggressive defense, the Bearcats advanced to the second round where their focus now shifts to the Burke County High School Bears this upcoming Friday.

Friday’s playoff game got off to a fast start as the Bearcats capitalized on their first drive, taking the first lead of the night just three minutes into the game. After wide receiver Antavious Murphy took two screen passes to set the Bearcats up inside the red zone, running back Keenan Phillips finished the job as he took a 13 yard carry to the end zone to give the Bearcats a 7-0 lead.

After a defensive stop gave the Bearcats the ball back, Phillips went on an incredible 30-yard touchdown run where he broke multiple tackles and stayed on his feet all the way to the end zone. Phillips’ second touchdown of the day gave the Bearcats a two touchdown lead just halfway through the first quarter.

One bright spot for the Baldwin Braves was running back Micah Welch who rushed for two touchdowns in back to back possessions, including a 77 yard touchdown run to cut the deficit to 21-13.

Welch finished the day with 29 carries for an impressive 244 yards and three touchdowns on the day. After Welch’s back to back touchdowns, the Bearcat defense settled in and began to make stops, including a blocked extra point attempt which would stall the Braves scoring until late in the fourth quarter.

Bearcats head coach Jeff Littleton was pleased with the way that his team settled in and focused on tackling during the second and third quarters of the game after giving up two touchdowns.

“We didn’t really change up anything scheme wise when Welch got going we just got more aggressive and tackled better,” said Littleton. “He had a lot to do with their running attack being so successful. He’s a really good back and runs hard and is extremely hard to bring down.”

The second quarter saw the passing game take stage as Cam Sanders took a bubble screen 29 yards for the score followed by Antavious Murphy hauling in a 38 yard deep pass from Bo Smith on the very next possession.

Wide receiver Antavious Murphy also reached a milestone Friday night as he passed 1,000 receiving yards on the season as he finished the day with six receptions for 83 yards and a touchdown to lead the team on Friday.

With Murphy and Phillips as the Bearcats one-two punch on offense, coach Littleton knows the impact and challenges they can bring opposing defenses.

“Big time players make big time plays and they’re both big time players,” said Littleton. “They both feed off of each other and it’s difficult to defend. If you decide to double Antavious it leaves only five or six in the box which then opens things up for Keenan and vice versa. We need to take advantage of what the defense gives us and execute when they have the ball in their hands.”

Two Bo Smith touchdown runs paired with defensive takeaways by Tashun Carter capped off with Darius Mills returning an attempted onside kick 70 yards for a touchdown, the Bearcats cruised to a 58-20 first round victory.

Next up for the Bearcats is a matchup with the 9-2 Burke County Bears who defeated LaGrange in the first round of the playoffs. Coach Littleton is focused on getting his team better everyday and executing the game plan they have implemented each day.

“We have to bring the energy, focus and intensity to practice and just keep getting better,” said Littleton. “The standard is the standard and that standard is to get better everyday. Every team we face has the ability to knock us in the mouth if we’re not prepared.”

Burke County will come to Centennial Field on Friday night November 18 as kickoff is set for 7:30 p.m.