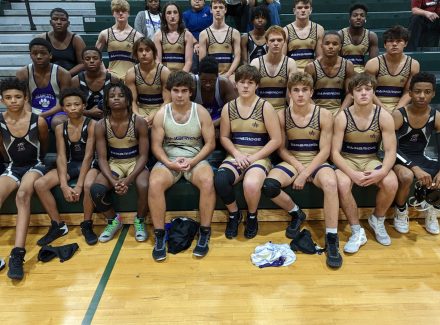 The Bearcat wrestling team opened their season this past weekend as they traveled to Waycross to compete in the “Swamp Duals”, hosted by Ware County. Despite not having the entirety of their team yet, the Bearcats still saw great success in their meet as they saw victories in two matches.

The Bearcats jumped into action early Saturday morning as they competed in five meets throughout the day. For their opening competition, head coach Paul Coleman was focused on getting his wrestlers experience as well as challenging them to compete at a high level.

“The team was a mix of Varsity and JV with 8th graders being included as JV,” said Coleman. “We do not have our full team, as half of the team is still playing football or other fall sports. For many of those who did travel with us, it was their first time wrestling a live match against someone else other than their teammates. We competed well, winning two of the matches. The Varsity team had great wins over Brantley County and Toombs County, while the JV squad fell short to Effingham, Ware County, and Glynn Academy. The goals for our team on this first tournament of the season were simple: Wrestle with 100% effort, show grace in both victory and defeat and have fun competing.”

Although this was the first meet of the season, Coleman is excited with what he saw from his team. Coleman was especially impressed with the leadership and chemistry he saw among his wrestlers and knows that with more meets and experience, the more his crew will continue to grow.

“I personally think that the group can get stronger, chemistry wise, as the players were coaching each other and showing great comradery cheering one another on,” said Coleman. “This will allow for leaders to emerge, while creating a positive and confident energy that we can bring into every meet.”

“We are excited to be hosting the Bearcat Invitational on December 17th and the Region Team Duals on January 7th,” said Coleman. “At both tournaments we will have the BMS chorus sing the national anthem, while the BHS ROTC will present the colors. For the Bearcat Invitational FCA will be running concessions, and I am in the works of having the cheerleading squad join us.”

For Coleman and his Bearcats, the winning expectations have been implemented as they have goals of a Region Championship and Final Four berth.

“Our team goals are to win region team duals, return to the elite eight, and finish in the final four,” said Coleman. “Individually we believe that we can have over seven region champions, have everyone qualify for State, and have 5+ state placers with at least one person finishing at the top.”

One wrestler that Coleman highlighted and has been impressed with is team captain Joshua Fillingame. Fillingame has been instrumental in being a leader for the Bearcats team and has also been able to bring his skills learned from other extracurriculars into wrestling.

“I have a few wrestlers that I expect to do well, but I want to spotlight Joshua Fillingame,” said Coleman. “Joshua is the Drum Major for the BHS Band, a part of the BHS Swim Team, and is our 2022-2023 Wrestling Team Captain. Last year he placed fifth in state, won region for his second time, and went 4-0 at the Swamp Duals. I expect him to help rally the team to win Bainbridge’s first Wrestling Team Region, win Individual Region again, and place at the top at State.”

Outside of competing and winning matches, Coleman especially wants his wrestlers to learn the importance of coming together as a team and wants to give his wrestlers an extended family where they can always count on each other.

“I hope that wrestling helps show them that they can be a part of a team, while being independent,” said Coleman. There are going to be times where they struggle both in wrestling and life, so what will they do in response to the struggles life gives them? I want them to have a chance to have an extended family. After every practice we end practice with ‘Family’ on three. I really want these kids to learn the importance of that.”