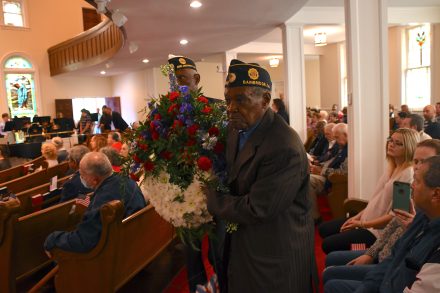 Samuel Anderson, Lester Burke, Chuck Lewis and Hill Yates performed the placement of the wreaths at the Veterans Day ceremony.

Mayor Edward Reynolds began the ceremony with the welcoming speech. “I’m honored to stand here before you on such an important day,” he said. “Our purpose today is to honor our service members, and to remember the sacrifices they made, and the courage it takes to defend our country.” He continued, “We stand in the presence of patriots, the family and friends of those who bravely served… Our gathering is just a token of appreciation for the pride that beams in our nation today, and everyday.”

After music provided by the BHS Band, city councilwoman Roslyn Palmer gave the introduction for the ceremony’s keynote speaker, Douglas Griffin. “I’ve often been told ‘Thank you for your service’, and I’m always appreciative of the thoughtfulness, but actions do speak louder than words, and to everyone here today, thank you for putting your support into action by being here,” he said.

Griffin went through how he ended up serving in the Army, beginning with his growing up surrounded by family members that had served, continuing into middle school, where a visiting speaker convinced him to join JROTC in high school. “JROTC helped me stay focused and stay on track of accomplishing my goals,” he said.

He went on to discuss his college career, followed by his experiences in the Army, before transitioning from active duty to reserve and moving his family back to Bainbridge. “Now let me make it clear, transitioning from the Army was a very difficult decision. It was a three year decision. The Army is a great organization, and helped me become the person I am today,” he said.

He continued, “When I was younger, the term ‘veteran’ to me was a word with such a simple definition. It was someone who simply served in the military. But as I’ve gotten older and more experienced, the word ‘veteran’ has taken on a much more deeper meaning.”

After Griffin concluded, the BHS band performed the Armed Forces medley, with members from each branch standing. Afterwards, Samuel Anderson, Lester Burke, Chuck Lewis and Hill Yates performed the placement of the wreathes. Richard Collins performed the salute to departed veterans, with the BHS band playing Taps. Chris Humphries brought the ceremony to a close with the benediction.