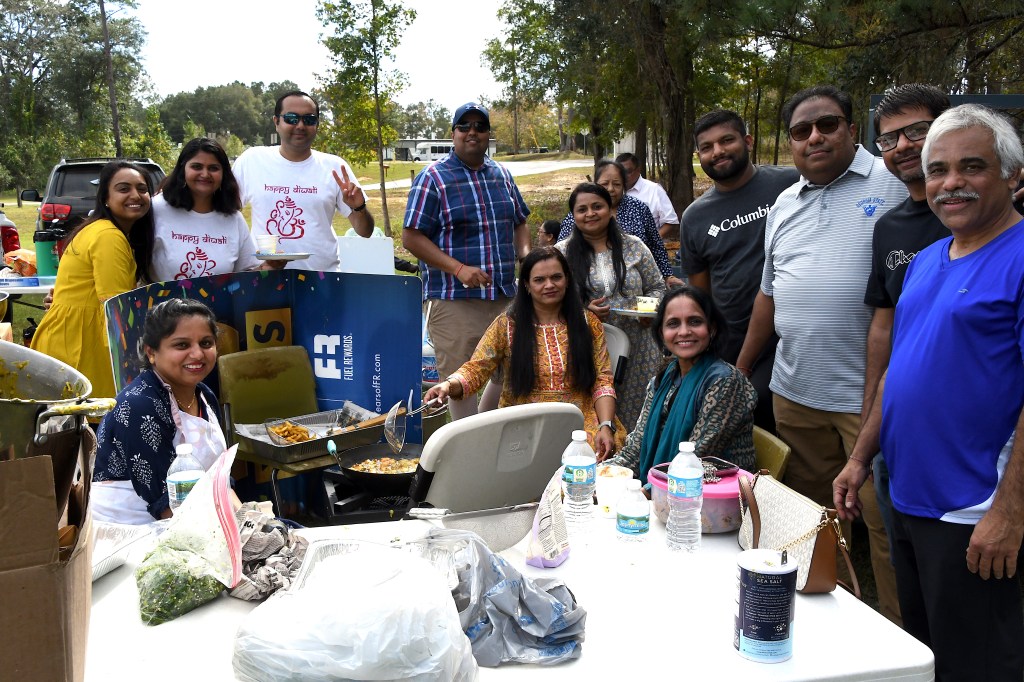 The local Hindu community celebrated Diwali at the Boat Basin this past Sunday, with three home-cooked Indian meals all day.

Members of the Bainbridge Hindu community gathered at the Boat Basin on Sunday for this year’s celebration of Diwali, the Hindu Festival of Lights. The holiday is connected to the Hindu epic, the Ramayana; specifically, Diwali honors the return of Rama, his wife Sita and his brother Lakshmana, after 14 years in exile and after slaying the ten-headed demon Ravana. According to the story, villagers lit the path with lights to celebrate their return; now, Hindus continue the celebration with candles and oil lamps, as well as sparklers and fireworks, with celebrations in India typically lasting five days.

This marks the second year the local Hindu community celebrated the holiday here. The Post-Searchlight spoke with Brijesh “BJ” and Vijal Patel from King’s Korner on Monday about this year’s event. “We were supposed to do fireworks yesterday, but something happened and they could not do fireworks,” Vijal explained. “Last year we did do fireworks, as a showing of lights, of the happiness in your life,” she continued. “In India, all over the place, everybody’s house, anywhere you go, they light the lights. In everybody’s house, the whole house, the whole village, the whole city, it would be covered with the lights.”

The event began that morning at the Boat Basin with breakfast, and lasted through lunch and dinner until late in the evening. Much of the meals consisted of traditional Indian food. “For the breakfast there was all the pakoras we made, like with green chilies, potatoes,” Vijal said. Pakoras are fried vegetable fritters. Most of the food was cooked on site. Games like cricket were played, and a bounce house was also available for the kids.

This year saw higher turnout than last year, with well over 100 people attending.

“It’s really great when all the people work together,” BJ said, “because all the people are busy all the time, and this is the one day, because of Diwali, we all get together, having some family time together. “