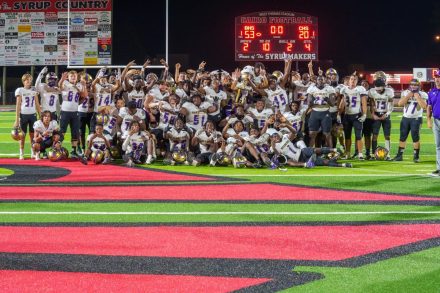 The Bainbridge Bearcats football team took home the 2022 Region Championship on Friday night after a dominant 53-20 win against the Cairo Syrupmakers. After starting the season 2-4, the Bearcats rattled off four straight exclamatory wins, going 4-0 in region play.

As the Bearcats took the field Friday night in Cairo, Bearcat fans made the quick drive up to partake in the historic rivalry that means so much to both schools. The first quarter got off to a back and forth battle between both teams as the Syrupmakers struck first with quarterback Braylon Robinson connecting with Tyree Kelly for a 39-yard touchdown pass as the Syrupmakers jumped out to a quick 7-0 lead, igniting the home crowd.

The Bearcats were quick to respond, as they have done all season, as Javon Cox took a 45-yard carry to the end zone to lock the score up at 7-7 halfway through the first quarter. Cairo was able to retake the lead just before the end of the first quarter as wide receiver Amarion Byrden hauled in a 22-yard touchdown pass from Robinson. After a missed extra point, the Syrupmakers put the Bearcats in a 13-7 hole heading into the second quarter.

During the last four wins, the Bearcats have excelled in the second and third quarters and Friday night was no different. In those two quarters, the Bearcats flexed their muscles scoring five touchdowns, essentially putting the game away.

The second quarter scoring started with an incredible play by Dontavious Broadnax as he picked up a fumbled snap and ran it six-yards into the end zone. An extra point by Nicholas Tyre gave the Bearcats a 14-13 lead.

Wide receiver Antavious Murphy showcased the playmaking abilities that the Bearcats possess as he hauled in three straight touchdown passes, each over 25 yards with the longest being a 48-yard reception.

Murphy finished the day with an impressive nine catches for 174 yards and three touchdowns, averaging 19.3 yards per reception.

After Murphy’s offensive onslaught, the Bearcats had a 40-20 lead as the third quarter was winding down.

Running back Keenan Phillips added to his impressive 2022 season as he powered in three rushing touchdowns to secure the Bearcats a 2022 region championship. His longest came in the fourth quarter as he took a 57-yard carry to the end zone to put the finishing touches on a historic night for the Bearcats.

Keenan Phillips finished the day with 18 carries for 109 yards and three touchdowns, as he finished the regular season with 14 touchdowns to lead the team.

As the clock hit zero the Bearcats rejoiced as they once again celebrated another region championship in a dominant 53-20 win against their rivals. Next up for the Bearcats is the beginning of what could be a special playoff journey.

The Bearcats will take on the Baldwin High School Braves on Friday, Nov. 11 at Centennial Field for round one of the 2022 GHSA 4A Playoff Tournament. Matchup wise, the Bearcats matchup well against the Braves.

The Braves finished the regular season with a 4-6 overall record going 3-3 in region play. Offensively, the Bearcats 31.3 points per game gives them an advantage over the Braves who currently average 24 points per game. Defensively the Bearcats also statistically lead the Braves as they have allowed just 181 points total this season, opposed to the Braves 293 total points allowed.

Despite the statistics, the Braves will bring a playoff energy that the Bearcats must match at home for an opportunity to advance and continue their journey to their third State Title in BHS history.