Looking back at the 1982 Champions 40 years later 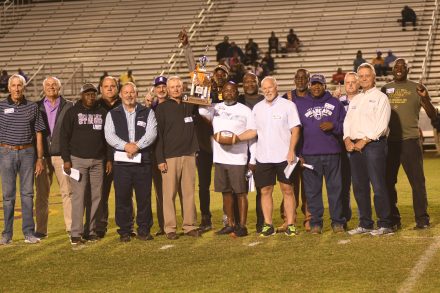 This past week the Bainbridge community has reminisced and celebrated the 40th Anniversary 1982 Bainbridge High School Football state championship team as they were honored pregame before the Bearcats dominated the Hardaway Hawks in the last home game of the 2022 season.

As the championship team gathered pregame in the north corner of Centennial Field, the ‘82 Bearcats enjoyed a catered dinner while laughing, reminiscing about old games, and catching up with friends that they lost contact with during their journey of life. The smiles that the Cats had on their faces all night brought a joyous vibe to Centennial Field all night on Friday.

Despite the state championship season being 40 years ago, head coach Ralph Jones remembers that season and the group of guys like it was yesterday.

As the Bearcats entered the 1982 with high expectations after a much improved 1981 season where they won five games and just missed the playoffs, Jones had a feeling that 1982 could be a season that the community would remember.

“During 1981 we lost to four teams that were top five teams in the state and we played them pretty competitively,” said Jones. “We felt like we were going to build off of the foundation we had set the year before as far as playing together and understanding your role.”

Commitment, courage, character and togetherness were four key values that Jones preached to his team before the season. Jones emphasized the importance of commitment when it came to preparation during the week and always trying to be perfect in everything the Bearcats did.

“You could tell that this group hated to lose,” said Jones. “We had a really self motivated group and these guys number one focus is winning so when the whole group is focused on one common goal it’s pretty easy to get them to buy in and do the work.”

One key moment during the 1982 season where Jones and his group realized their potential ironically enough, came after a 19-7 loss to Mitchell Baker. Jones talked about that loss being a character and adversity check for his team as they would have to rise above and string together consecutive wins against tough competition.

“After a disappointing loss at home week three you had to character check your team after that loss,” said Jones. “They knew that after that loss we pretty much had to win out and play perfect football. That loss really refocused us and made us realize that not only we had talent, but we just needed to be consistent and take your preparation during the week seriously. We worked them hard and they responded to it. When your kids respond to tough times it really builds trust within the system”

The Bearcats went on to win every regular season game from there on out, most wins convincingly by over 20 points.

The 1982 was a stacked roster both offensively with a running back duo of Calvin Close and Scott Carroll, but defensively as well with a number of guys who had the ability to make a play on every down.

“We had a lot of speed on the team,” said Jones. “Scott was a bruiser. He was a tough, hard runner who wouldn’t go down on the first hit and brought a great character of toughness to the team. Calvin had that speed and exciting ability to make a cut and turn it into a big run. In those days Georgia running back Herschel Walker was doing his signature over-the-top dive into the end zone, and Calvin could do that just as well as anybody.”

Jones also spoke highly of quarterback Bobby Walden and his ability as a dual-threat quarterback and his leadership skills. Defensively, Jones spoke to the great balance they had on that side of the ball, with every position having players that could step up and their consistency in keeping big plays to a minimum.

“We had a really balanced defense,” said Jones. “We had some really good down lineman, our linebackers were headhunters like Jackie Wilson. We had a speedy secondary with Kenny Howard and Mark Willis. I think what was important about that group is not only were they good football players but they were smart and they put in the work everyday to get better.”

One regular season game that Jones reminisced about and considered a key part of their season was a win against Cairo where they had to stop a stellar offensive team that was breaking state records as they shutout the Syrupmakers 7-0 in a defensive battle.

“We felt really good after the win against Cairo and knew that if we keep our head straight and keep doing what we do, we have a really good shot at being special,” said Jones. “Cairo was a pivotal, rivalry game because they were really successful and had a really good offense that was breaking passing records. It was a good atmosphere with both teams having a good turnout.”

During a rainy 1982 state championship game against Gainesville, the Bearcats speed-driven offense was limited by the weather and the team really counted on their defense to make stops and force turnovers while their offense protected the football and used a heavy rushing attack.

“One play that sticks out to me is when we had to come up with a goal-line stand late in the game,” said Jones. “During the game our focus was on taking care of the football and making them earn it. Each series was a field position battle and we really had to play smart and sound.”

After clinching the first football championship in Bainbridge history, the celebration and community gathering was one to remember for coach Jones and his team, and it was a moment that tied his group together for the rest of their lives.

“After we won we were staying in Atlanta in the Falcons training facility and I wanted our team to get a first class experience because of the work they put in all season,” said Jones. “I got a call from Mayor Reynolds and he asked us to stall for a few hours and not come home because they were preparing a surprise celebration. We told the bus driver to drive around and we drove around for a few hours and our players were so ready to get home. When we got home people were on the side of the road for miles leading up to the town waving signs and hollering and we were escorted by the national guard armory right next to the stadium. The amount of people that met our buses was like the college days. The way our kids felt getting off that bus and the smiles on their faces are something I will never forget. You could tell we did something special.”

A special part of the 1982 team is the way they have stayed connected and maintained their relationships as they have moved on throughout their lives. A state championship ties a group of players together forever and that is something the 1982 team showed.

“I still look at those guys just like I did 40 years ago no matter where they are or what happened in their life because they sacrificed so much and worked so hard for me and our coaching staff,” said Jones. “Every person on that team was committed and contributed and even 40 years later if I had to come out of retirement and coach one team, that is the group I would want on the field because I know they can always compete.”