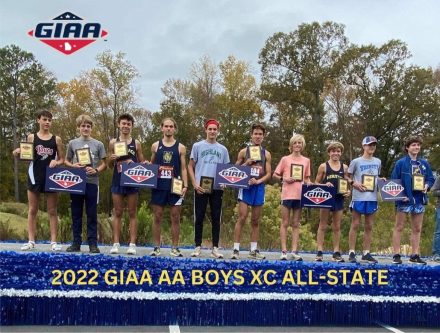 The Grace Christian Academy cougar cross country team competed in the GIAA State Meet this past weekend in Macon as they saw a thrilling end to an unforgettable 2022 season. Walker Elrod capped off his freshman season with a fourth place finish at state with a time of 17:09.

Cougar runners Owen Earnest, Keith Edison and Jay Lanier also saw top 50 finishes with times of just over 20 minutes. On a course that was full of hills and all different kinds of terrain mixed with competition that was among Georgia’s best, head coach Elizabeth Simmons was extremely pleased with the way that her cougar runners competed.

“The course at First Presbyterian Day School is both beautiful and the most challenging of our season,” said Simmons. “The competition at State did not disappoint and they were ready to race. I thought our runners did a great job of paying attention to the different surfaces and making a plan on how to begin the race, where it started flat and then led to a large hill to set the tone for the rest of the race as they went up and down in elevation and in and out of woods and trails. They knew it would be hard and were ready to run their last race of the season and enjoy it the best they could.”

The 2022 season was uniquely special for the Cougars as they took the next step in their program development. The Cougars saw many runners who have never competed before, step into competition and saw improvement each week.

Coach Simmons was able to lead her runners and give them confidence each time they stepped on the course. One special part of the 2022 season was the way that the Cougar runners led each other as a team.

“I love seeing the dynamics of the team as they came together at meets and challenge each other, encourage and support, as well as suffer through to the end where they can barely stand or speak,” said Simmons. “We lean on each other. It’s all part of it. Many play another sport during XC season so being able to build chemistry during practice is hard and they did their runs on their own. It showed the discipline within the group. The girls ran first at State and were able to tell the boys about the course before they went out. The new runners, and there were several, really showed great improvement from the first meet to the last.”

One runner who really stuck out this season was freshman Walker Elrod. Elrod consistently broke PR’s, saw top three finishes and most importantly brought a sense of encouragement and experience to the cougar squad.

“Walker Elrod was a great addition to our varsity team,” said Simmons. “Walker works hard and has the mindset of a winner. He practices hard and can compete with the best competition which he saw this weekend as we competed against many of the best teams throughout the State and he came in 4th. I am excited to see how he continues to train and shave time off his races.”

Most importantly, Simmons hopes that the support she showed her runners this season not only encourages them to keep running, but also gives them a winning attitude they can bring to their lives in the future.

“It was a great season especially for our new runners with many shaving up to three and four minutes off their times,” said Simmons.  “I hope they will continue running. The confidence built from running is powerful and a can-do attitude seems to benefit those with the desire to run.My hope for all of the team is that they become better people, more functional in all of their activities and develop healthier habits that they will carry on into college and adulthood.”