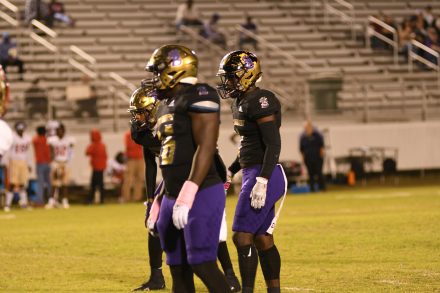 After a dominant 42-0 win over the Hardaway Hawks, the Bainbridge Bearcats football team moved to 3-0 in region play, pushing them over .500 for the first time this season as they improved to 5-4. The Bearcats pounced on the Hawks early, scoring touchdowns on their first five drives of the game.

Before the game, Bainbridge High School honored the 1982 State Champion Bearcats who were the first team to bring a football title to Decatur County. Current Bearcats head coach Jeff Littleton was not only honored to play in the presence of the ‘82 champs, but also uses that team as motivation for his players to learn from.

“We talk about that team on a regular basis to our kids,” said Littleton. “They had an incredible run and an outstanding season and we’re honored to have them here and celebrate their success.”

A defensive stop gave the ball back to the Bearcats and Keenan Phillips took the game by storm. Phillips on the second play of the drive took a carry into the end zone where he bulldozed defenders in his way, breaking tackles all the way to the goal line to push the Bearcats to a 14-0 lead.

On the next Bearcat possession, Phillips continued his aggressive running and found the end zone for a second time as the Bearcats lead stretched to 21-0 just halfway through the first quarter.

The Bearcat defense got in on the action as well in the first quarter as linebacker Dontavious Broadnax scored his second defensive touchdown of the season as he intercepted a Hawks passing attempt and took the ball 41 yards to the end zone to extend the Bearcat lead to 28-0.

Keenan Phillips extended his touchdown total for the season to 13 with his third rushing touchdown of the quarter as he took a seven-yard carry to the end zone as the Bearcats got out of the first quarter with a 35-0 lead.

Phillips ended the day with a sensational 12 carries for 156 yards and three touchdowns, averaging 12 yards a carry. Head Coach Jeff Littleton was pleased with the way his offense started the game and executed the work that they prepared the previous week in practice.

“It’s super important to jump off to a quick start especially when you’re at home,” said Littleton. “We took advantage of some things we saw on film and our kids did a great job of going out there and executing.”

The Bearcat defense also had an incredible performance as they pitched a shutout as they consistently got to the Hawks quarterback and caused chaos in the backfield. A late receiving touchdown by sophomore Cam “scoop” Scott pushed the Bearcats to a 42-0 lead to end the night and capture their third consecutive win and fifth win on the season.

With one game left in the regular season and a chance to capture the region championship, head coach Jeff Littleton is focused on keeping his team hungry and prepared as they head into their final week and the state playoffs.

The Bearcats will travel to Cairo on Friday as they take on the Syrupmakers at 7:30 p.m. for a chance to bring home the region championship and prepare for a state championship playoff run.