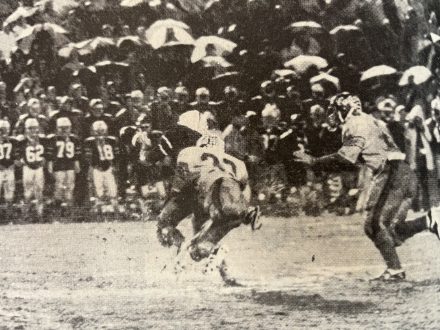 Carroll’s touchdown run was set up by safety Kenneth Howard who recovered a fumble by Gainesville fullback Sammy Williams at the five-yard-line. On first down Carroll took a handoff from quarterback Bobby Walden, slanted to his right and went in to score. Willis’ extra point kick was a line drive through the uprights.

The score came with 5:44 left on the third quarter clock and put the Cats up 7-0.

Moments before the winning touchdown and extra point kick the Bearcats drove to inside the Red Elephants one-yard-line where they were stopped on downs. The drive started after defensive back Lamar Sweet recovered a fumble by Gainesville tailback Mike Byrd at the 32-yard-line.

The Bearcats came out throwing for tailback Calvin Close, incomplete for split end Phillip Bryant twice then hitting split end David Sykes for 15 yards and a first down at the 17. Walden was facing a fourth down and 10-yards-to go situation when he found Sykes open over the middle and hit him with a strike.

Close tried to dive in for the score on fourth down. He came down in the end zone but the ball came loose before he crossed the plane of the goal line. The Red Elephants took over at the one but Williams fumbled on first down and Howard claimed the pigskin for the Bearcats at the five. Gainesville’s only score of the night came with 6:28 remaining in the game when defensive back Olaffie Hester returned a punt for 48 yards for a touchdown.

Red Elephant head coach Bobby Gruhn elected to attempt to kick the extra point and tie up the contest rather than going for a two point conversion. The ball eluded quarterback and ho,der Cris Carpenter, however, and running back and place kicker Joe Derose was forced to pick it up and try to run with it. He started around the left side and just before being hit at the three pitched it off to Carpenter. Carpenter was knocked down by Willis at the one foiling a two-point conversion and preserving a one-point Bearcat lead

Carpenter tried to throw off the right side but it was incomplete and the Bearcats took over at the 13 with 8:19 showing on the clock. Carroll slanted right for two to the 15 then Close slanted left for three to the 18.

Jones elected to punt the wet pigskin on third down and Greg Waddell got it away. Hester pulled it in at the 48, cut sharply to his right and followed his blocking down the right sideline to score. The Bearcats drove 55 yards in nine plays the first time they got their hands on the football Saturday night. Tailback Tim Flanders returned the opening kickoff from his own 14 to his own 31 to get the drive underway.

Carroll went up the middle for nine to the 33 then went right for seven and a first down at the 25. Carroll was stopped for s yard loss on a pitch off the left side but on second down Walden threw to Sykes for 16 yards and a first down at the nine. Close slanted right for one to the eight then Walden fumbled on an option run off the left side. The ball was recovered by Sykes for a six-yard-loss back at the 14.

Facing a third down and goal to go situation at the 14 Walden dropped back to throw. He got it off but Gainesville defensive back Bernard Roberts picked it off at the six and returned it 25 yards to the 31.

The Elephants drove the ball to the Bearcat 32 where cornerback Phillip Bryant returned the favor with an interception of a Carpenter aerial.

Bryant quenched the drive when he intercepted the ball at the 35 and returned it to the 38. He fumbled the football trying to run after the interception but teammate and linebacker Andy Belcher recovered it.

Just before halftime the Bearcats drove to the Elephant 11 where they were unsuccessful on a field goal attempt. The drive started after linebacker Jackie Wilson recovered a Byrd fumble at his own 46. Walden quickly threw left to tight end Todd Mills for 23 yards and a first down at the Gainesville 31.

Close slanted right for seven to the 24 then Flanders went left for on to the 23. Close went right again and this time got eight and a first down at the 15. Carroll went up the middle for four to the 11 then Close slanted right for no gain. Walden threw incomplete for Sykes and Willis entered the game for the field goal try. Holder Kenneth Howard could not get the ball down on the tee and was thrown for a nine yard loss at the 20. Carpenter took the snapp and stepped back for a loss to the 19 as the clock ran out ending the half.

The Red Elephants came up with good field position on a Bearcat punt attempt in the first quarter. Waddell was unable to get the kick away following a wet snap and the Elephant defense pulled him down at his own 39. The Bearcat defense rose up to stop the penetration, however.

Late in the game linebacker Terry Heard recovered a Byrd fumble at the Gainesville 29. Carroll slanted right for four to the 25 then went left for no gain. Carroll went right again for two to the 23 but a delay of game penalty moved the pigskin back to the 28.

Walden optioned right for eight yards to the 20 where Gainesville took over on downs. Carpenter tried to complete a pass to his right from the 20 but linebacker Wilson knocked it down. He then tried to throw right again but this time it was deflected by cornerback Willis. Two more Carpenter incompletions turned the ball over to the Bearcats at the 20.

Walden took the snap and stepped back for a yard loss to the 19 as jubilant Bearcat fans counted off the final seconds of the contest.