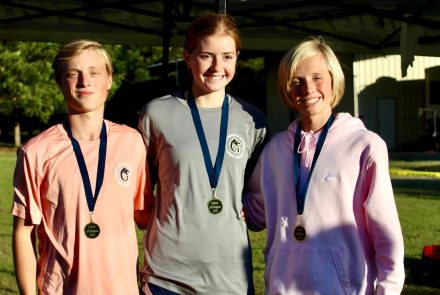 The Cross Country season is approaching the most exciting time of the year for runners as they prepare for the State Championship Meet in Macon, Ga this upcoming weekend. Grace Christian Academy runners Owen Earnest, Kate Poitevint and Walker Elrod all helped secure their spot in the state meet with a strong showing in Region.

During the region meet, GCA freshman Walker Elrod fought through illness and still saw a second place finish, adding to his incredible season. GCA also saw Kate Poitivent lead the girls team as a top ten finish pushed both the girls and boys teams into the state meet.

“I am so proud of Kate, Owen and Walker,” said Simmons. “Walker ran a strong race but didn’t feel his best and a senior beat him at the end. As a freshman I believe he is a runner to watch.  Owen has worked really hard and has improved throughout the season and being in the top ten at Regions was quite impressive. Keith Eidson was 11 and Jay Lanier was 13. So all three boys came in together with really improved times.

Simmons was especially impressed with Kate Poitevint as she not only saw a top ten finish, but did so while splitting time for both volleyball and cross country season.

“Kate has been splitting her time on the Volleyball court and the running trails so a top 10 finish for her is awesome,” said Simmons. “She is a very competitive sportsman and really sets out to do her best in all she does. Kate has shown strength and an extra willingness to do the workouts when not able to practice together with the team. She has done many workouts on her own.”

The leadership among the Cougar runners is something that Simmons has noticed and been impressed with all season from her runners. Whether it is cheering each other on during meets, stretching together or giving tips on each course to each other, the Cougar runners run as one family which has been a large part of their success.

Each runner has a specific skill set and niche that they bring to the team and that each runner can learn from.

“Walker brings an extra bit of enthusiasm and knowledge to the sport,” said Simmons. “Walker is a self motivated ‘let’s get it done’ guy at practice. He comes knowing he will work hard and do what is scheduled for him. Owen has been a strong leader at meets, especially with the younger runners. Kate is an encourager. Even when she feels not as prepared as she’d like she rallies the group and gets them ready to do their best race. Kate has a strong work ethic  and is always ready to go do the workout.”

The state meet in Macon will be a new experience for coach Simmons and her runners but they are ready for the competition and excited for what lies ahead. In the week of preparations, Simmons and her team are focused on doing what they can to prepare for a course that is in unfamiliar territory.

“This will be the first State meet for them so I think both teams are in for a welcomed experience and will enjoy everything the meet has to offer, including the very tough Competition,” said Simmons. “The meet is hosted by the First Presbyterian Day School and to be run on a course we are not familiar with against many teams that we have not raced against throughout our season. My hope is that we compete well and gain the desire to work even harder to get back there. We have a young team and I believe this experience will help motivate them for more, as individual runners and as a team. I want them to represent Grace Christian Academy well and be proud of the work they have put in through their training.”

For a younger team, the GCA cross country team has turned heads and surpassed expectations people had for the Cougar runners. The state meet presents an opportunity for the runners to not only compete for a championship, but also to garner experience which they can learn from and draw back to as they continue their high school journey.

Coach Simmons has most enjoyed seeing her runners’ improvements each week and the bonds they have formed with each other as they become one team.