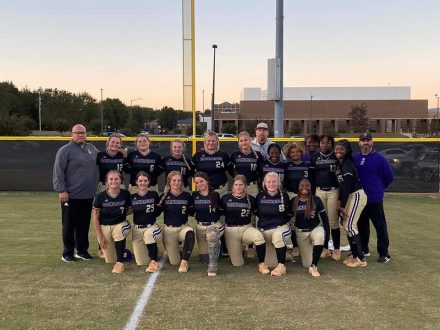 The 2022 softball season came to a close over the weekend as the Bainbridge High School Lady Cats softball team fell in the GHSA Super Regionals Championship game in a hard-fought battle with Whitewater. Despite the loss, the 2022 season was an unforgettable journey for head coach Rex Wade and his players.

The Lady Cats started the GHSA Super Regionals off strong with an opening round win against Howard by a score of 8-2, followed by a 9-2 win which pushed the Lady Cats into the Championship game against Whitewater.

Head coach Rex Wade was extremely impressed with the attitude his players brought to the tournament and the way that they battled adversity.

“It was a bittersweet weekend for sure but one thing I told the girls, especially the seniors, before the championship game is leave it all out on the line. Don’t hold anything back,” said Wade. “Our girls went out and performed. We just came up a bit short. Whitewater is a terrific team and we just came up short.”

Lady Cat seniors Kristin Bennett, Annalisa Nix, Lenijah Henry, and Destiny Woodard had a weekend full of emotion as they put on the purple and gold one last time. Coach Wade is especially proud of the way that they grew up and showed the team what it is like to become a family.

“These seniors have been with us since seventh and eighth grade and we’ve really seen them grow and develop into young women,” said Wade. “Even off the field just the way these girls carry themselves and lead both on and off the field. They were able to bring the team together and showed them how important it is to forget about teenage girl drama and become a family and I know whatever they do in the future they will be confident and successful.”

After beginning the season 0-6, the Lady Cats rallied, especially in region play, stringing together 15 wins, going 10-2 in region play. Coach Wade credits their strong finish to playing tough competition at the start to better prepare them for big moments.

“Like every season there are ups and downs,” said Wade. “We started off 0-6 but played really big schools like Colquitt County and I think that experience allowed us to get hot and gave us confidence to compete against anybody.”

During the offseason Coach Wade is focused on working on getting his players stronger and smarter and also has some team bonding activities planned to help his players grow trust within each other to better prepare them for big moments.

“You hear it all the time, players are made during the offseason,” said Wade. “We’re gonna have a week off to get refreshed and refocused and then we’ll hit the weight room and start getting bigger, stronger and more conditioned. We’ve also got some team bonding stuff planned so our girls can better trust each other during games and situations.”