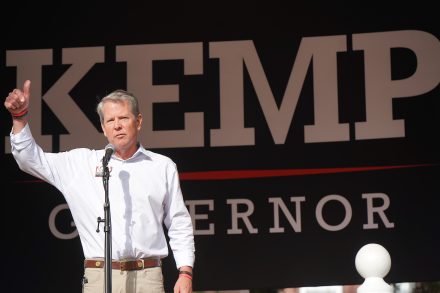 With November only a few weeks away, political campaigning has begun to reach a fevered pitch. Bainbridge residents got a taste of that this week. A crowd gathered on the Square first thing Thursday morning, dozens turning out to see Governor Brian Kemp. The governor passed through Bainbridge as just one stop along a campaign circuit through south Georgia.

Preceding the governor, both House candidate Chris West and State Senator Dean Burke addressed the crowd. “Under Sanford Bishop, our district has been left behind in many ways,” West said. “Georgia, as a state, has done great, but our district has been in the top 10 poorest Congressional districts in the country for the last 30 years, and the only common denominator is Sanford Bishop,” he continued. “It’s unfortunate, we’ve got a lot of great attributes, a lot of great things in this district.”

As the speeches began, a truck with large video panels displaying anti-Kemp advertising and slogans began to drive in circles around the Square. Activists with anti-Kemp slogan signs were also present around Downtown for the duration of the rally.

“The thing I want to stress about governor Kemp,” Senator Burke said, “is that, unlike a lot of politicians, he has done what he said he was gonna do. Things that he ran on four years ago, things that were on his list, which is increased economic development in rural Georgia, improving healthcare access and outcomes in rural Georgia, increasing the payroll and rewards for those that are teaching our kids… he’s done all those things.”

Governor Kemp finally took to the gazebo to speak. “I just want to thank you guys for being here this morning,” he began. “I was taking credit in Mitchell County for bringing the rain, I don’t know if y’all need rain or sunshine down here right now. It depends on which farmer you talk to,” the governor joked. He acknowledged West, Senator Burke and Representative Joe Campbell, as well as supporters in the community. “First of all, I just want to thank Jay Wells and Vicki Ford for helping us get a great crowd together today. Vicki has been helping us on the ground here with a lot of other folks that are with us this morning, I just want to thank you guys for that.” Sheriff Wiley Griffin, tax commissioner Mark Harrell, and superintendent Tim Cochran were also acknowledged by the governor.

Kemp went on to tout his record in office, beginning with education. “Tim just brings a tremendous amount to the table, he certainly did that during COVID as we were working to get our kids back in the classroom, when you had other states that didn’t do that. We are a better state for that,” he said. “But we’ve also worked on other great issues, like our teacher pipeline legislation, to figure out how we can get more teachers into the system.” School security grants, teacher pay raises and reducing testing were some of the other education-related choices the governor cited as successes.

One common theme of the governor’s speech was that the upcoming election was “the fight for the soul of our state”. “Mardi and Lucy are on the campaign trail with me today,” he said, “we are getting up, and the rest of the girls are, and we’re working hard every day to make sure Stacey Abrams is not going to be our governor or our next president.” The crowd applauded.

He continued, further touting his record and throwing verbal barbs at his opponent. “When I took my oath of office… I promised to protect the laws and the constitution of this state, and the Constitution of the United States, and that’s exactly what I’ve done. I also said in my inaugural address, that I was gonna work every day for every one of our citizens, whether they voted for me or not, and we have done that.” He continued, “And that’s what I was doing when I kept our economy open when the virus hit us, at the start of a global pandemic… and the person that’s paying for that truck to run around y’all’s square right now, she did not want me to do that.”

The governor also highlighted the state’s economic performance during his term. “We can’t fix all the bad policies up in Washington D.C. right now. But what we’ve been focused on, the general assembly and myself, is helping you fight through that.” He went on to promise further economic relief should he be re-elected. “We did that last year by returning $1 billion of your tax dollars to you. You re-elect us on November 8, we’re gonna go back in January and we’re gonna do that again, to put more of your money back in your pocket that we didn’t need, because we were open when Stacey Abrams didn’t want us to be.”

The governor brought his speech to a close by encouraging people to both get out and vote, as well as encourage others to vote. “We’ve got to shake the bushes, we’ve got to beat the trees, we’ve got to knock on the doors and make phone calls, email your friends, whatever it takes, just ask people if they’re gonna vote.” Kemp finished by flashing a thumbs-up as the crowd broke into applause. The governor visited for a few more minutes, shaking more hands before leaving for another stop on the campaign trail.