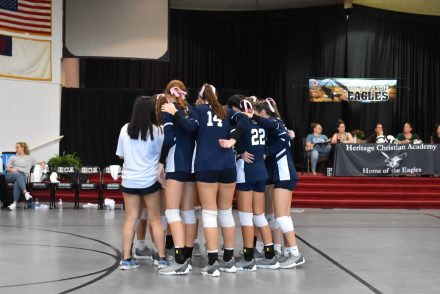 The GCA Lady Cougars volleyball team goes into the biggest week of their season as they travel to Valdosta to compete in the 2022 GIAA State Volleyball Championships. The Lady Cougars enter the 16 team tournament as a five seed as they will take on St. George’s in the first round.

After a performance in the Region tournament where the Lady Cougars knew that they left money on the table, head coach Kelsey Harrell and her squad are eager to bounce back and compete for a State Title.

“Over the course of the whole season our team has learned how to mentally prepare for the state tournament,” said Harrell. “Physically we are ready, but we are spending time making sure that they are ready to execute mentally.”

A few things that coach Harrell would like to see out of her team in the state tournament is the ability to adapt to pressure situations and execute with confidence, something the team has been doing all season long.

“It is crucial for our team to experience the pressure of big games so that once we are within the state tournament, the jitters and the nervousness is out of our system,” said Harrell. “We still have to work on executing under pressure, but they have done a good job this year of playing well under pressure and beating teams. This is going to be very beneficial for our team in the years to come since we are such a young team.”

A State Title is something that the GCA Lady Cougars squad has envisioned and worked for since the beginning of the season. Coach Harrell was a member of the last GCA Lady Cougars team to bring home a championship and wants her squad to experience that same jubilation.

“My goal is to make it to the final game and bring home a state championship,” said Harrell. “The team has worked toward this goal all season, and we are excited to see what they do next.”

The 2022 season for the GCA Lady Cougars has been nothing short of a success. After a slow start, the Lady Cougars really got hot and rode their momentum to a 15 win season; going 8-2 in a 10 game stretch in September.

Playmakers are nothing uncommon on this Lady Cougars squad as the big three of Mallorie Jordan, Sybil Lee and Kate Poitevint have filled the stat sheet all season long and brought the energy that Coach Harrell looks for from her players.