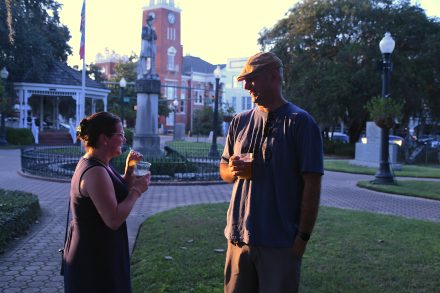 Despite a smaller crowd size, people still came out to enjoy drinks, deals and music.

Thursday evening saw people flitting from shop to shop on the square later than usual, as the city hosted another Sip & Shop event. To add some liveliness to the drinks and deals, this time the city hired husband and wife duet Otha and Kristi Allen to provide music.

According to city special event coordinator Randee Eubanks, the event was a little smaller than previous ones. “It seems to have been a smaller crowd,” she told the Post-Searchlight in an interview. “I know the Rec Authority had several games going on last night. Middle school football, soccer, so I know there’s a lot of stuff gong on.”

The next Sip & Shop is scheduled for October 27, this time with a Halloween theme, and a final one or this year will be held around Christmas time.

Other upcoming events the city plans to host include the 80s style “Block Party on Broad” event, on Thursday, September 29; the Flint River Fair will be held from October 4-8 at the Boat Basin; a Halloween-themed Sunset Cinema will be held in Willis Park on October 8; and the Munchkin Masquerade and Trunk or Treat will be held Downtown on October 31.

For more information on these and other upcoming events, Randee Eubanks can be reached at 229-515-8616.