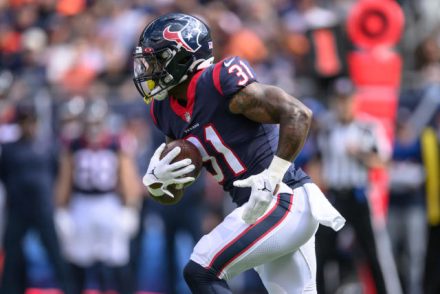 REPRESENTING BAINBRIDGE: Houston Texans running back and BHS Alumn Dameon Pierce carries the ball for his first career NFL Touchdown against the Chicago Bears on Sunday.

“Pierce..behind Heck… and he is in for the touchdown! The first NFL Touchdown for Dameon Pierce,” said CBS announcer Andrew Catalon as Bainbridge native Dameon Pierce pointed up to the sky and celebrated his first NFL touchdown on Sunday against the Chicago Bears.

Since April, life has been a sprint for Houston Texans running back and Bainbridge native Dameon Pierce as he makes the transition into NFL life. Earlier in the week, I had the opportunity to sit down with Pierce and really get to know the story behind Pierce’s journey from Centennial Field to NRG Stadium.

The former Bearcat running back made history during his time at BHS and cemented his name as one of the best running backs the state of Georgia has seen. During his career, Pierce accumulated over 6,000 yards rushing and 92 touchdowns with his senior season being one to remember.

During his senior year as a Bearcat, Pierce rushed for 2,100 yards and 32 touchdowns while also passing Herschel Walker on the GHSAA’s All-Time rushing list, finishing in the top ten. Pierce ended his senior season with a State Championship as he went on to the University of Florida.

Pierce was quick to give his praises to coaches Jeff Littleton and Larry Cosby who helped him not only reach his potential physically, but be able to mentally realize and use his potential.

“Bainbridge is home,” said Pierce. “Everyday I use my hometown and a source of motivation because they’re the ones that made me. Whether it was family, friends, coaches; everything I have comes from Bainbridge. Coach Lit and the coaching staff always told me to believe and envision where I’m going. They knew the talent and the smarts that I had and they helped me realize what I can become.”

At the University of Florida, Pierce was able to continue his development and open the nation’s eyes on the energy that he can bring to a football team. Pierce bases his running off of speed, physicality and effort which is not only what Coach Littleton and the Bearcat coaching staff instilled in Pierce, it is what stuck out to the Houston Texans coaching staff and ultimately solidified his position as the feature back in the 2022 Texans offense.

“Having coaches tell me ‘hey you’re going to be in the league one day, this is how you need to act’ and little stuff like that really stuck with me and gave me the motivation and confidence to keep working,” said Pierce. “Seeing it come to reality is honestly bittersweet because high school is over. I can’t go back and do those days over again.”

Pierce emphasized it was the little things that Coach Littleton and Coach Cosby taught him that really went far with not only the Gators staff, but the Texans staff.

“Coach Cosby and everybody made sure I did the little things right,” said Pierce. “Even the most minute details like the way I warm up really carried over into what I do now and I really thank Coach Lit and Coach Cosby for that because there was a lot of stuff I didn’t need to be coached on that I learned from them and it made the coaching staff quick to trust me and give me responsibility.”

At the University of Florida, Pierce had a consistent four years while also having flashes of brilliance in big game situations. During his time as a Gator, Pierce made appearances in every game during his four year span. Pierce finished his career with 1800 total yards and 23 touchdowns in 50 games played. Pierce also garnered SEC Freshman of the Week honors in 2018 after a 48-yard game winning touchdown led the Gators to a win against Tennessee.

In 2020, Pierce put the nation on notice when he not only made an appearance in the SEC Championship game against Alabama, but rushed for a touchdown in their loss to the Crimson Tide.

After graduating from the University of Florida in 2022, Pierce’s life was changed forever on April 30 when he received the call from the Houston Texans that he was going to be selected with the second pick of the fourth round in the NFL Draft.

Since then, Pierce has been laser focused on being the feature back for the Texans and continuing to grow and develop his craft. The transition to NFL life was different for Pierce, but not something Pierce was unable to handle.

“NFL life is different, man,” said Pierce. “In college and even high school it’s, you go to class, do homework and play football. The NFL your focus is always football. You have to find ways to keep things fun and interesting. What I have been doing is surrounding myself with veterans and learning and observing the ways that they do things and most importantly taking care of their bodies. We’re going on week three and my body has never been this sore so I know I’ve got a lot to learn.”

Pierce really put an emphasis on studying film, being able to be coached hard and having a genuine personality is the most important ability that a rookie can have in the NFL and is just one of many reasons why the Texans had the confidence to name him their feature back.

“In the NFL everyone knows how to play and knows their stuff,” said Pierce. “If you don’t watch film or study your playbook, it shows. I think that’s why the coaches noticed me because they coached me hard and I responded to it. They saw the personality I have both on and off the field and I think I was able to stick out and be one of the guys they trust.”

For Pierce, stepping out onto the field week 1 against the Indianapolis Colts was a “bucket list” type of moment for Pierce.

Pierce has had a productive start for the Texans in just three games, with his best coming this past Sunday against the Chicago Bears where Pierce accumulated over 100 yards from scrimmage and punched in his first career rushing touchdown. The Texans running back is quickly becoming a fan-favorite and a big target for fantasy football owners across America.

“If I could tell the kids in Bainbridge anything I would tell them to use me as a catalyst and motivation,” said Pierce. “They are the reason I do what I do now because of my hometown. I was in the same school, sitting at the same desk, playing at the same football field. It can be done and I just hope those kids can use me as that motivation.”