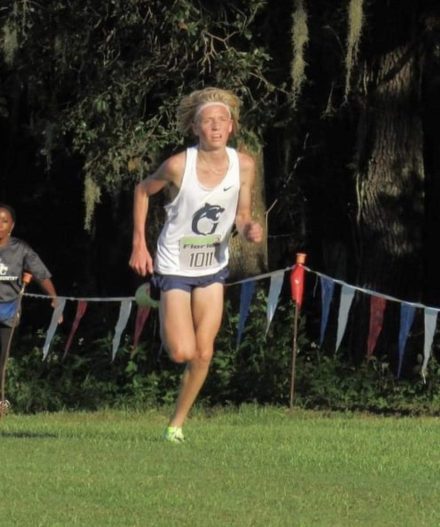 Grace Christian Academy freshman Walker Elrod continues to sharpen his talents and represent the Bainbridge community as he competed in the Thomas University Race in Tallahassee, FL.

Elrod set a GCA and a PR as he finished with a time of 17:15, earning him a top three finish overall. In Tallahassee Elrod had the chance to compete on the course where the NCAA Nationals are held which not only gives him familiarity with the course, but motivation to continue to set records.

Elrod also ran alongside Landon Watts who graduated from Bainbridge High School in May and went on to Thomas University on a full scholarship.

GCA Cougars head coach Elizabeth Simmons not only is impressed with the work that Elrod puts in on his own time, but also with the way he leads and conducts himself around his peers.

“Walker is an outstanding runner but most importantly he is a tremendous leader,” said Simmons. “He is always cheering on his teammates, helping his teammates and leading the way. Whether it’s giving his teammates pointers on the course or cheering them on during the race he is always involved. These kids really look up to him and we are so happy he’s on our team.”

Up next for Elrod is the Panther Prowl in Tifton this upcoming weekend where Elrod will join his GCA Cougars teammates as he shoots for his goal of a sub 17 time.