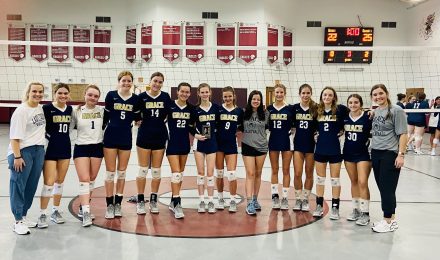 Championship mindset: The GCA Lady Cougars Volleyball team holds their semifinalist trophy as they saw a second place finish in the Golden Isle Volleyball Tournament in Brunswick, GA. Overall the Lady Cougars went 4-1 in the tournament as they earned second.

For the Grace Christian Academy Lady Cougars volleyball team, September has been a month to remember. The Lady Cougars have won six out of eight games in the month of September and have turned in a 9-8 record overall in the season.

Most recently, the GCA Lady Cougars competed in the Golden Isle Volleyball tournament in Brunswick, Ga where they went 4-1, winning their pool and giving them a berth in the tournament championship where they eventually fell to Bethlehem Christian Academy.

Throughout the past month and throughout the tournament, the Lady Cougars played with an energy and confidence that has been instilled in them by head coach Kelsey Harrell.

“Our biggest goal is to always play with energy and confidence no matter the opponent,” said Harrell. “The confidence will come from winning the games we play between now and then, executing every chance we get, and bonding more as a team. When we play with confidence, there is no team that we cannot beat.”

During the Golden Isle Tournament, the Lady Cougars went into their matchup in Pool B as they played three games on Friday night, coming out victorious in all three. The next day they clinched their pool as they defeated Frederica Academy in three sets to earn a spot in the tournament championship.

“This weekend could not have been any better,” said Harrell. “ We had to earn the wins and work for them. That excites Delaney and me as we head into the region tournament because the girls overcame challenges this weekend, played with heart, and executed with determination.”

After four games in less than 24 hours, exhaustion began to set in as the Lady Cougars fell in the championship game to Bethlehem Christian Academy in three sets. Despite the loss, a second place finish and championship berth in the tournament not only was a great accomplishment for the Lady Cougar squad, it gives them plenty of momentum as they prepare for the Region Tournament and State Playoffs at the end of the month.

Something that really impressed Harrell in the tournament was the way that her team overcame adversity and only focused on the present moment.

“The goal for this weekend was to bounce back from our performance against Aucilla and not let that loss bring us down as a team,” said Harrell. We just focused on our game and made the other team work to score points on us instead of giving them points on careless errors. The team executed those goals and is ready to go into region play with a good mindset.”

Harrell was most impressed with the performance of Katherine Griffin who had her best performance of the season in Brunswick, as well as the trio of Mallorie Jordan, Kate Poitevint and Sybil Lee.

“Katherine Griffin played her best volleyball game this weekend. She made crucial plays and was very aggressive on the front row,” said Harrell. “Mallorie Jordan played very well this weekend and sparked energy on our side of the net. She was a leader on the court with 21 kills and 68 digs. Kate Poitevint had 15 kills and made a statement with the kills that she had. Sybil Lee was the glue of the weekend with 79 assists and plays with a calming presence but a dominating mindset.”

For the Lady Cougars, being able to go undefeated on Friday night and win their pool on Saturday earning a spot in the Championship game was one of the highlights of their entire season. The Lady Cougars have appeared in the Golden Isle Tournament four times and this year was the first time they were able to go undefeated in pool play and appear in the Championship game.

Up next for the Lady Cougars is a matchup against the Brooks County Trojans as they will travel to Quitman, GA on Thursday looking for their tenth win of the season.