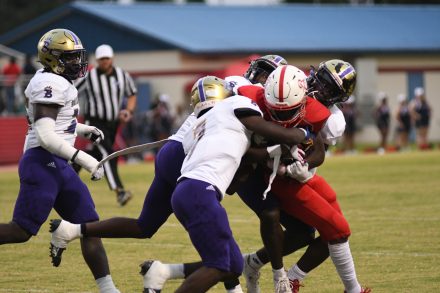 The Bainbridge Bearcats suffered their third loss of the season on the road as they fell to the Brooks County Trojans 28-16. This loss puts the Bearcats at a 2-3 record overall at the halfway point of the season.

For the Brooks County Trojans, a 4-1 start is one of the best of their region as they look to continue to build off of previous years success and become the team to beat in their class.

The game started off on a high note for the Bearcats as quarterback Cam Sanders marched the offense on a four minute drive and connected with wide receiver Antavious Murphy to give the Bearcats an early 7-0 lead.

Shortly after, the Trojans offense began to take speed as an 80-yard touchdown run quickly evened things up. After a defensive stop, the Trojans marched down on another offense drive as Camauri Brinson rushed for a touchdown, pushing the Trojans lead to 13-7.

Just before the end of the first half, the Trojans returned a Bearcats field goal attempt for 97 yards as they put the Bearcats in a 19-7 hole heading into the half.

After a first half to forget for the Bearcats, they responded in the second half on both sides of the ball. The defense only allowed one touchdown for the rest of the half and was able to make stops, keeping the Trojan offense off the field.

Players like Amari Ross, Tevon Moore and Dontavious Broadnax were the leaders of the Bearcat defense as they were all over the field, shooting gaps and making tackles.

Despite the offense sustaining long drives over five minutes long, they were unable to push enough points across to get the job done. The Bearcats ended the game on a high note as they went on a four minute drive which resulted in a Bo Smith rushing touchdown and a William Goodson two point conversion reception to put the final score at 26-18.

Head Coach Jeff Littleton expressed that he wants to see his players eliminate sloppy play but was ultimately proud of the way the team fought in the second half.

“We played sloppy on both sides of the ball to start which put us in a hole,” said Littleton. “We played well at times but we still have a lot of things to clean up. I’m proud of the way we fought and I give Brooks County a lot of credit. They’re a great football team. We just need to come in next week prepared to work and focus on the next game.”

The Bearcats will hit the road again next week as they travel to take on Ware County at 7:30 p.m. next Friday night.