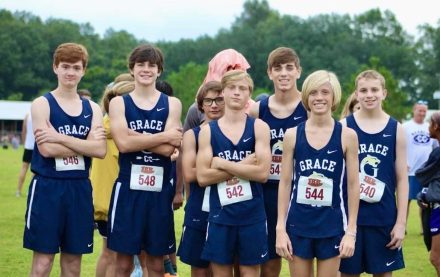 After last week’s cross country meet in Thomasville was rained out, Bainbridge High School and Grace Christian Academy runners had another chance to compete this past weekend in the 2022 Lee County Invitational.

In a race that saw over 200 runners from across the state of Georgia, the city of Bainbridge was well represented both on the leader boards and in personal bests.

For Grace Christian Academy, freshman Walker Elrod came in second overall with a time of 17:35, just two seconds behind the first place runner. Elrod was followed by his teammates Owen Earnest and Keith Edison who, along with other teammates, saw personal bests. As a team, the Cougars finished 13 overall in a competition that saw 19 teams.

Cougars head coach Elizabeth Simmons was most proud of the way that her team picked each other up and showed encouragement to not only their runners, but also the Bainbridge Bearcat runners.

“Saturday’s race we saw a lot of healthy competition,” said Simmons. “The course was a very spectator friendly course so everyone was able to see the runners. It allowed us to cheer for each other and encourage each other. What was really exciting was seeing the way that the kids cheered on the BHS runners and the way they cheered us on. It really motivated our kids and gave us great experience.”

Something that really stuck out to Coach Simmons was the leadership of freshman Walker Elrod and his encouragement given to not only his teammates, but his competition as well.

“Walker does a great job of also coaching up our middle school runners,” said Simmons. “He helps them stretch and warm up and he’s always talking to them, giving them pointers and telling them things to look out for on the course.”

Next up for the runners is the Deerfield Windsor Invitational next weekend which Coach Simmons and her runners are extremely optimistic about.

“The course in Deerfield is a course where a lot of PR’s are broken so a lot of our runners are locked in on a time and determined to hit it,” said Simmons.