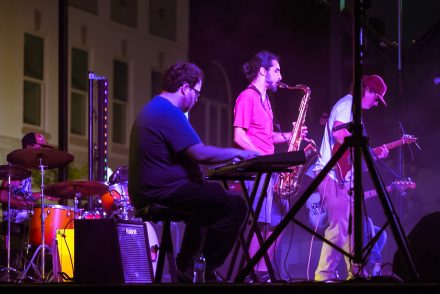 The rain held off for crowds to gather and enjoy a variety of musical acts on the River South stage during Saturday’s annual event.

Despite the dreary weather, crowds flocked to downtown Bainbridge over the weekend for this year’s River South festival. Though the rainy forecast forced the sidewalk chalk drawing competition to be cancelled, there was still plenty to do. A yoga class hosted by McKenzie Conder kicked off the festivities that morning, with food and goods vendors, a bounce house for the kids, and glass blowing demonstrations by Hot Glass Academy from Americus available through the day. The main draw was the music, with various artists performing through the afternoon, leading to the headlining performance by the Red Clay Strays.

According special events coordinator Randee Eubanks, roughly 500 people showed up. “It was busy in the morning, and then it was busier after dinner time. After 7:00 it really picked up,” she said. “We did see people who came for the morning part, and then came back, which was good to see.”

There were some slight hiccups with the musical performances, with the first scheduled artist, Evan Barber, unable to make it because of a flight delay. Members of other bands filled in; the other bands that performed included Red Hoss Suckas, Few Miles South w/Uncle C, and Dirty Bird and the Flu.

The event has been in the works for a while. “We’ve had the date set since the beginning of the year,” Eubanks said. “We really started planning it in late spring, and things really came to fruition over the summer.”

She described the event as a success, with people from out of town travelling to attend. “It was a bigger turnout than last year, so that’s always a success, and we just hope to see it grow every year.” Downtown stores and restaurants reported a successful Saturday, with sales up at least 25%. “That’s what it’s all about, enticing people to come hang out in downtown Bainbridge,” Eubanks said.

One out-of-town visitor, Jim Martin from Dothan, sang the festival’s praises, saying, ”People were super friendly and helpful and were from all over, not just locals. It was a great ‘hometown’ festival. I will be back!”