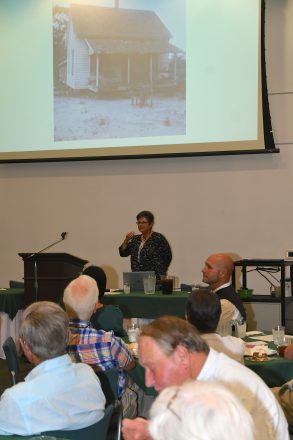 Members of the Decatur County Historical Society were treated to a history lesson on Decatur schools at Monday’s meeting.

To kick things off, she presented pictures for various schools and class pictures from the Decatur County community throughout the decades, dating back to the early 1900s, as well as a teacher’s contract from the 1920s. Bonifay then went on to list the various legal changes to education of the last century.

“Compulsory attendance began actually in the mid-1850s, but it did not become law in Georgia until 1916,” she said. “I’ll assume that’s because of people working farms. But the law changed; initially when it went into affect, compulsory attendance was from age 8 to 14. It’s now only 6 to 16.”

Other changes included the change in transportation, from many students walking to school, to students either going by car or school bus.

Food was another major change. “After the Depression, many family struggled to put food on their table, and certainly the families in Decatur County were no exception,” she said. “The National School Lunch Act, that created free and low-cost lunches for low-income families, became law in the mid-1940s… One thing that hasn’t changed is that, while many children don’t like school lunches, the reality is that hungry children do not learn well.”

Other legislation discussed included desegregation, with the order going into effect for Decatur County in 1967, though it took a few years for actual desegregation to occur; Title IX went through in 1972, and the Students with Disabilities Act was passed in 1975. “I know when I went to school, most handicapped kids did not attend regular public schools,” Bonifay said.

Changes in curriculum and instruction included the passage of Title I, the No Child Left Behind Act, and introduction of Common Core, as well as the rise of homeschooling and charter schools.

After Bonifay concluded her program, Historic Society president Roslyn Palmer concluded the meeting with several business items, including an application for FOGG grant funding, an update on the ceiling leak at the museum, and an update on the upcoming Decatur County Bicentennial festivities. The next Bicentennial meeting is scheduled for Tuesday, September 27, 5:30 PM.

The Historical Society will also not hold a dinner meeting in November, instead hosting a reception from 5:30-7:30 at the museum on November 14.