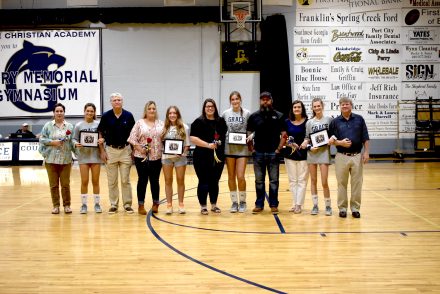 On a night where the Grace Christian Academy Lady Cougars volleyball program honored their seniors, the Lady Cougars picked up their eighth win of the season against Community Leadership Academy in four sets.

This win marks the Lady Cougars fourth win in a row and their eighth win in their last 10 games. Head Coach Kelsey Harrell has helped lead the Lady Cougars into this hot streak by preaching both consistency and commitment to excellence.

“The challenge Delaney and I set before them is to continue to play better than the last great game they played,” said Harrell. “We preach that contentment is not an option, and they have bought into that mindset. That has definitely changed the way the team plays.”

During their home game against Community Leadership Academy, the stands were filled as fans flocked to honor the 2022 Lady Cougar seniors on senior night. Seniors Katherine Griffin, Mallorie Jordan and Lauran Roberts were honored pregame as they were joined by their parents.

The seniors not only bring an advantage to the team on the court, but their leadership and mentality is what Coach Harrell is most proud of.

“That trio of girls brings energy, determination, and grit to the team as a whole,” said Harrell. “The rest of the girls feed off their aggressiveness and raise the caliber of which they play to match those girls. Since August Mallorie’s been playing the best ball I have ever seen her play. Kate is a beast on the front row when she is attacking and even more so when she’s blocking. Sybil is most likely the best setter that has ever come through GCA. Not only does she make killer assists, but she also is one of the best servers and plays aggressively offensively and defensively.”

Next up for the Lady Cougars is a region tournament and a push for the state playoffs. Something Coach Harrell and her squad are most proud of this season is the way they have responded to adversity.

After losing to teams like Community Leadership Academy earlier in the season, the Lady Cougars responded and came back with a vengeance against teams they previously struggled with.

“Our biggest goal is to head into the region tournament and state playoffs with confidence,” said Harrell. “The way the team played against CLA is the definition of what GCA Lady Cougar volleyball is. We beat a team that we lost to earlier in the season. That is the way any coach wants a team to respond and play, and Delaney and I could not be more proud of them.”