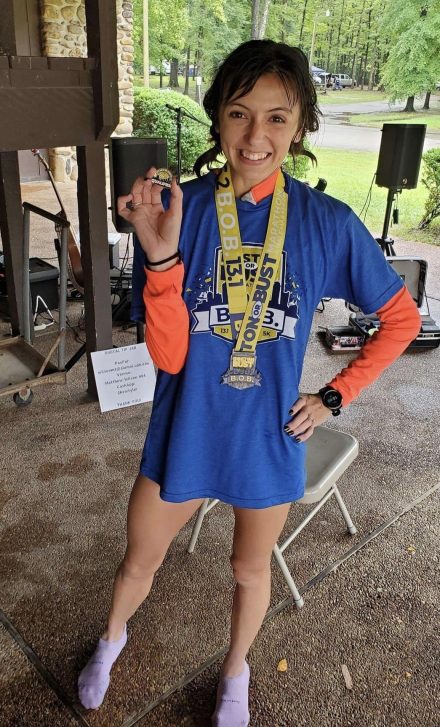 Bainbridge local Alison Ringle Wells is Boston Marathon bound after qualifying at the “Boston or Bust ” marathon in Huntsville, Alabama. Wells finished the 26.2 mile marathon in under three hours which not only secured her a spot in Boston this coming April but gave her the highest score among all women.

Wells was an extremely successful runner in her time at Parkway High School in Louisiana as she was a 2013 State Champion and the leading prep distance runner in the state of Louisiana. Wells went on to run at the University of Alabama where she competed all four years for the Crimson Tide.

After a break from running and starting a family, Wells wanted to set a goal for herself and accomplish something that she had always had her sights set on.

“Competing in the Boston Marathon is something I have always wanted to do. I never knew when I would do it or when I would have the chance to do it,” said Wells. “After college I was super burnt out from running and didn’t think I would want to run again. I needed to set a goal and go out and do something for myself. I read books and made a vision board so it’s cool to see that come to fruition.”

Huntsville’s “Boston or Bust” race was Wells’ first time competing in a full 26 mile marathon so being able to stay on pace and conserve her body throughout is something that Wells not only worked on since January but also had to focus on during the race.

“It was a different experience because the first 18 miles you’re with a specific pack of people,” said Wells. “Leading up to the race, my training pace gave me confidence that I could hit sub three hours but it was still a big unknown because the longest I had ever ran was 21 miles.”

In the last mile of the race, Wells described it as the “longest last mile of a race I had ever experienced” as she not only had to keep her body pushing but also had to battle the elements of a torrential downpour and wind.

As she begins her preparations for the Boston Marathon in April, Wells plans on competing in a number of 5k and 10k races, as well as continuing her tempo training of slower pace with bursts of fast pace in between.

Wells is excited to embrace the atmosphere of the Boston Marathon and hopes to set new PR’s on the course in April.

“If I can run faster than I did in Huntsville and set a PR that will be special because Boston is such a difficult course but it’s full of energy,” said Wells. “I know it will be an awesome experience.”