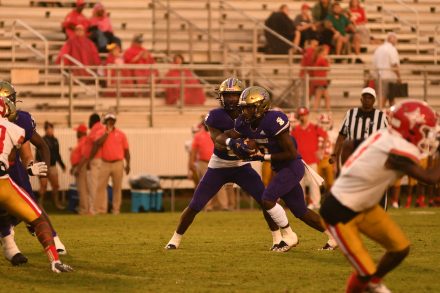 After a disappointing road loss last week, the Bainbridge Bearcats responded with a dominant 31-7 win over the Thomasville Bulldogs that featured an aggressive defense, special teams magic and a comfortable offense.

In the first half, the Bearcats defense brought the juice as they pitched a shutout and came up with timely plays to set up their offense.

At the end of the first quarter, the Bulldogs gained momentum on offense as they drove the ball down to the one yard-line, looking to score first. However, the Bearcat defense brought a “bend but don’t break” mentality as they held the Bulldogs on three plays forcing a huge fourth and goal.

On fourth down, linebacker Tevon Moore shot the gap and tackled Bulldog runner DJ Thurman short of the goal-line, giving the Bearcats the ball as the Bulldogs came away with no points on the drive.

The Bearcat defense continued to set the tone in the second quarter as James Jackson came up with his first interception of the season, setting the Bearcat offense up at the 40 yard-line.

With first down carries by quarterback Cam Sanders and running back Keenan Phillips, alongside receptions by wide receiver Antavious Murphy, the Bearcats were able to be the first to put points on the board with a Nicholas Tyre 32-yard field goal, giving the Bearcats a 3-0 lead as they headed into halftime.

“We did a great job of rotating players in and out and keeping players fresh,” said head coach Jeff Littleton. “We had a great four days of practice and it showed. We won the game in the way that we prepared.”

The third quarter carried plenty of fireworks for the Bearcats both on offense and defense. Despite a 79-yard end around touchdown by Bulldogs running back DJ Thurman, the Bearcats quickly regained momentum.

The Bearcats offense responded on the next drive as quarterback Cam Sanders connected with Antavious Murphy for a 33-yard touchdown as the Bearcats regained the lead.

“Our offense executed and our playmakers made plays when we needed it the most,” said Littleton. “That was the difference this week as opposed to last week. We had some key third down conversions, some explosive plays and just kept fighting.”

After another stop by the defense, linebacker Dontavious Broadnax seemingly changed the game as he shot the gap and blocked the Bulldogs punt, giving the Bearcats offense the ball inside the 25.

“Punt blocking is something we work on a lot and Dontae has a knack for it,” said Littleton. “He got a great jump and went full speed. That’s something we always teach our guys is that when you go full speed, good things will happen.”

The offense put together another productive drive as Cam Sanders began to find comfort and pick apart the Bulldogs defense for multiple first down connections, setting the Bearcats up inside the five yard-line.

Running back Keenan Phillips topped the drive off with a one-yard touchdown run as the Bearcats gained a two possession lead.

Linebacker Dontavious Broadnax put the game away in the fourth quarter as he intercepted Camren Hill’s pass and returned it 54-yards for the touchdown, giving the Bearcats a 31-7 lead which they would not squander.

This win puts the Bearcats at 2-2 overall as they return to the road next week to take on Brooks County at 7:30 p.m.