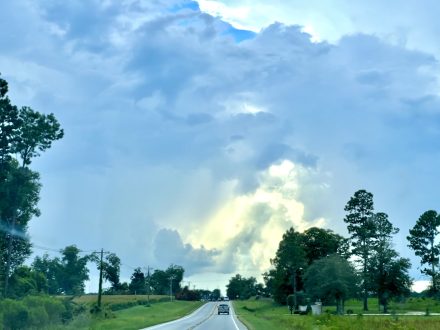 Not only does the higher level of rain pose a threat to crops, the constant cloud cover and humidity provides a perfect environemnt for fungi and rot to damage them as well.

This year has seen extraordinary levels of rainfall in recent months, with flash floods in north Georgia this week being just one symptom. As for Bainbridge and Decatur County, the increased rain has been causing problems for local farmers as harvest season rolls in. Last year, from January 1 to September 5, the area had receiver 31.22 inches of rain. This year, within the same time frame, 40.67 inches have fallen. Nine extra inches, most of that within the last month.

The Post-Searchlight spoke with local farmers about the challenges they now face. According to Jeremy Faircloth, who manages roughly 3,500 acres for Dollar Family Farms, cotton and peanut crops have suffered not just from the increased rain, but from lack of sunlight due to the cloud cover, and the accompanying increase of humidity and moisture in the air. “The biggest effect I’m seeing is on the early-planted cotton, we’re starting to see a lot of boll rot,” he said. “The biggest effect on peanuts may be a little increase on white mold, keeping people out of the field, not being able to spray peanuts on time, having to carry chemicals to their airplane.”

Of course, all crops are susceptible to an overabundance of rain. While most corn should have been harvested by now, any that may be left is vulnerable to it’s own set of problems. “A lack of rain affected corn early on,” Faircloth said. “I’m sure there are some folks that are having trouble with the corn harvest, that’ve still got corn in the field… If you don’t have good shuck curvature on the ear, it can get moisture in there and cause rot and the seed to sprout. You get a thunderstorm with a lot of wind and it can lay it on the ground.”

For farmers struggling with their peanut crop, Faircloth mainly recommended staying on time with spraying the crop. “Stay on schedule with the peanut spray, that’s really all you can do.” For dealing with boll rot, divine intervention was the only option left: “Prayer’s the only thing you can do at this point. Pray for sunshine and clear days.”

Zach McLendon, a local farmer and sales rep for Dollar Farm Products, echoed Faircloth’s statements. “It hasn’t been fun this year,” he said. He cited the same occurrences of white mold and boll rot, attributed to the increase in humidity brought by the rain.

Rain has also affected not only farmer’s ability to spray peanuts, but also to harvest them. “The peanuts get dug up, it starts raining and you can’t pick them, so you’ve got peanuts on top getting constantly pelted by rain,” he said. Another risk of rain getting inside corn shucks is the production of aflatoxin, a toxic fungal byproduct. “We turned down 20 to 25 semi loads of corn due to high aflatoxins,” McLendon said.

Whether conditions such as these have the potential to ruin harvests. That said, if the weather abates soon, some farmers could come out of this year alright. “If the weather turns around, peanut farmers could still have a decent harvest,” McLendon said. Hopefully a little divine intervention comes in time.