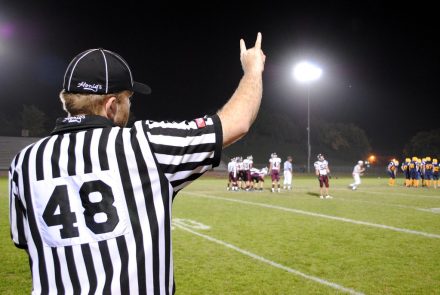 High school and youth sports are a major part of kids’ lives. Regardless if they continue sports at the collegiate or professional level, youth sports offer many great opportunities and skills for kids to learn. Youth sports teach teamwork, discipline, accountability, structure and so much more. From the time that I was five years old up until I graduated high school I was playing youth sports all year long and I couldn’t imagine a childhood without it.

However, youth and high school sports are seeing a shortage of referees and officials which can have a major impact on the future of youth sports. In an article by the New York Times, since 2018 roughly 50,000 high school officials quit, which is over 20% of the nation’s total. This has resulted in the cancellation of not only games, but leagues in general.

What is the cause of this shortage? Well, it starts with the toxic environment that parents, coaches and the players have created. Referees are constantly being yelled at, cursed at, have slurs hurled at them, and in some cases have even been physically assaulted.

In April of 2022 in DeKalb County, GA., a referee was chased down and physically assaulted by a group of youth basketball players. In Cincinnati, a 14-year-old soccer official quit on the spot as parents called her colorblind and shouted expletives at her after calling a foul.

In a survey conducted by Officially Human, which is an organization that promotes respect among referees, they found that out of 19,000 referees, 60% said that their top reason for quitting is the verbal abuse they take from parents and fans.

What parents don’t realize is that most referees are actually doing their kids a favor by being there. Referees only get paid on a per game basis so most officials are calling games to make ends meet after spending all week at their first job. Without referees, there is no game. Without games, there is so much missed opportunity for kids.

Playing travel baseball in Texas as a kid, I heard parents say things to umpires I wouldn’t even think about saying to someone’s face. A lot of parents think that because there is a metal fence separating the field from the stands that it gives them the right to say or act however they want, but in reality the only thing they are doing is embarrassing their own child.

At the end of the day, refs are still humans with lives to live. I’ve been a part of some really intense games and have been on both sides of a bad call and I understand it’s upsetting. But it doesn’t affect our lives. The sun will still rise the next day and life will go on.