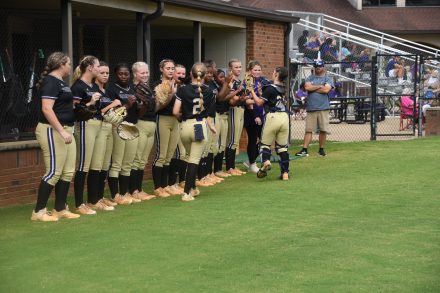 The Bainbridge Lady Cats softball team earned their first win of the season last Tuesday as they defeated Shaw in a 9-0 shutout. This win not only gives the Lady Cats confidence as they head into the bulk of their schedule, but also momentum and a glimpse of how dangerous they could be.

The Lady Cats started the game off with two first inning runs, not only giving the defense and pitcher Brenna Conley some breathing room, but also put Shaw in a deficit before they were able to see a pitch.

“Scoring two runs right off the bat was really big for us because it made them have to play catch up the entire game,” said head coach Rex Wade. “It gave our defense a cushion and allowed them to go out there and do their thing.”

Offensively, the Lady Cats were not only consistent as they pushed runs across each inning, but also disciplined in their plate approach which is a big emphasis that Coach Wade works on with his players.

“We work on situational hitting every time in batting practice,” said Wade. “We’ll often simulate two strike counts, one strike counts and stuff like that. Against Shaw we really did a great job in our plate approach and hitting the ball hard in the right spots.”

On the defensive side, pitcher Brenna Conley led the way as she pitched a shutout and continues to be one of the aces that the Lady Cats can count on this season. The Lady Cats also had a clean day as they were able to eliminate errors and play a “boring” style of defenses, according to Coach Wade.

“Our defense is probably the strongest part of our team,” said Wade. “Before every game I tell the girls to go out and play boring defense which basically means limit the errors and mistakes and play fundamental softball.”

This win gives the Lady Cats confidence and momentum as they move into the month of September, but Coach Wade and his players are only focused on the present, taking the season one game at a time.

The Lady Cats now shift their focus to Hardaway as they face off in a three game series beginning Tuesday at home at 5:30 p.m.