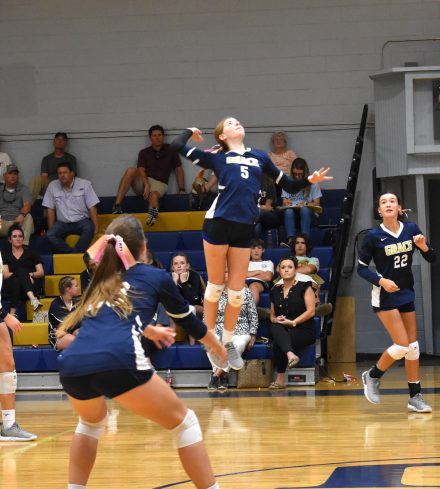 Against Brooks County the Lady Cougars were dominant in their attack, winning the match in three sets, outscoring their opponent by 40. Their largest margin came in the second set as they only allowed eight total points from Brooks County.

On the offensive attack, sophomore Kate Poitevint and senior Mallorie Jordan led the way as they combined for 11 kills at an 83% kill percentage. Sybil Lee also contributed on the offensive end, pitching in four total kills.

Lee was also no stranger to distributing the ball to her teammates as she led the team with 12 assists as she continues to be the assist leader this season for the Lady Cougars. The Cougars saw everyone contribute against Brooks County as freshman Laine Gay totaled eight digs to lead the team.

Head coach Kelsey Harrell emphasizes the importance of playing together and playing their brand of volleyball before every game to her team and it showed against Brooks County.

“Each game the girls see that we get better and better and see the potential we have,” said Harrell. “These girls are extremely motivated to compete and win and it motivates me as a coach to lead them in the right direction.”

On Thursday against Sherwood, the Lady Cougars played a competitive game, winning in four sets. The fourth set came in a nail-biter as they grinded out a gritty two-point victory, winning 25-23.

Senior Mallorie Jordan continued to be the leader that the Lady Cougars lean on as she led the team on the attack with 15 total kills at a 52% kill percentage. Sophomore liberi Savannah McConnell shows to be one of the Lady Cougars bright young stars as she recorded 40 total digs to lead the team as well as three aces on the serve.

“Savannah is our spark plug,” said head coach Kelsey Harrell. “She knows when to give us a boost and she is a leader in so many ways. She truly loves the game of volleyball.”