FSU defeats LSU in Thrilling Game For the Ages 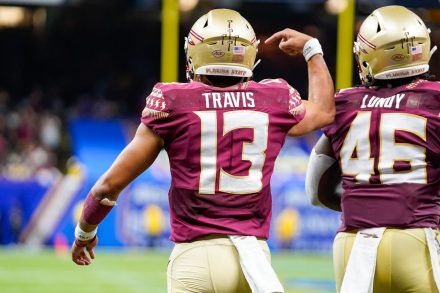 After a forgettable past few years, the Florida State Seminoles win Sunday night was anything but forgettable. What looked to be like a heart-breaking collapse that would haunt head coach Mike Norvell, turned into a finish for the ages as the Seminoles escaped LSU with a 24-23 victory.

As the Seminoles traveled to Caesars Superdome in New Orleans to take on the LSU Tigers, many thought the new look Tigers with long time Notre Dame head coach Brian Kelly at the helm would easily take care of the Seminoles. However, this year seems to feel different for the Seminoles squad.

First year head coach Mike Norvell has really improved quarterback Jordan Travis and the Seminoles offense as Travis had one of his best games as a starter. Travis finished the day with 260 passing yards and two touchdowns with a 83.4 QBR.

At the start of the second quarter, the Seminoles offense broke the seal as Jordan Travis pulled off a flea-flicker, tossing a 39-yard touchdown pass to Ontaria Wilson who made an outstanding one-handed catch in the end zone.

The Seminoles jumped out to a 17-3 lead in the third quarter as Travis found Wilson again in the middle of the third for a 27-yard touchdown, putting all the pressure on LSU in their home state.

LSU quarterback Jayden Daniels and running back Noah Cain responded at the end of the third quarter as they pushed across a touchdown with eight seconds left in the quarter making it a one possession game heading into the fourth.

Florida State seemed to put the game out of reach with nine minutes left as a rushing touchdown from DJ Lundy gave the Seminoles a 14 point lead in the fourth quarter.

Jayden Daniels orchestrated a five minute drive as he connected with Jerray Jenkins for a 22-yard touchdown putting the Tigers back in striking distance and in need of a defensive stop to give the ball back to their offense.

The Tigers defense made the stop and forced the Seminoles to punt the ball back to the LSU offense. As Seminoles punter Alex Mastromanno boomed a 47-yard punt to the LSU eight yard-line, LSU return man Malik Nabers fumbled the ball and gave the Seminoles the ball on the with just over two minutes left.

As the LSU fans at Caesars Superdome were in shock, Florida State fans rejoiced as the game seemed to be over with a quick score. However, the football heavens weren’t done with the game just yet.

At the one yard-line, Florida State running back Treshaun Ward fumbled the ball, giving the ball back to LSU with a chance to go 99 yards to tie the game with just over a minute left.

Jayden Daniels made plays with his arm and legs as he drove the Tigers all the way down to the goal line with one second left. As time expired, Daniels connected again with Jenkins for a two-yard touchdown pass, only needing an extra point to send the game to overtime.

LSU fans rejoiced with excitement as the Superdome shook and Florida State fans stood there with looks of shock on their faces.

Seminoles fans ended up with the last laugh in an ending that college football fans will talk about for years to come. As LSU lined up to kick the extra point, defensive lineman Shyheim Brown shot around the edge in just enough time to block Damian Ramos’ kick, giving the Seminoles the win.

The Florida State sideline erupted as they poured onto the field to rejoice the heart-stopping victory. Seminoles fans made their voices heard in a stadium full of LSU fans as the Seminoles are off to their first 2-0 start since 2016.