College Football is Back 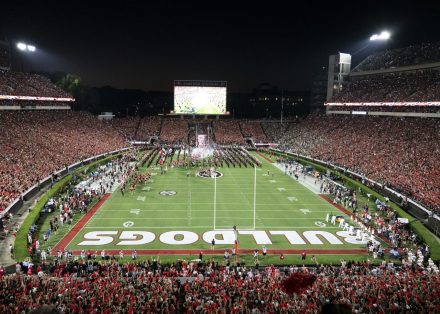 For the Georgia Bulldogs fans, this will be their first time defending a National Championship since 1980 and they will have a good shot at repeating as champions. The Bulldogs will open in Atlanta on Saturday as they take on the number 11 ranked Oregon Ducks in the Chick-Fil-A Kickoff game.

Despite losing defensive leader Travon Walker in the NFL Draft, as well as Nakobe Dean and Jordan Davis to the Philadelphia Eagles and number one wide receiver George Pickens to the Pittsburgh Steelers, the 2022 Bulldogs are still loaded with talent.

On offense the Bulldogs are returning Stetson Bennett who, although doesn’t put up Heisman-type numbers, is still a smart and disciplined quarterback who knows how to lead an offense. The offense is full of playmakers like wide receiver Brock Bowers and tight end Adonai Mitchell.

Georgia opens up as 17 point favorites against Oregon and I think Oregon will cover, but the Bulldogs will walk away with a week one win and will cruise to another SEC Championship appearance.

On the other side of the SEC I think Alabama is the obvious choice to compete with Georgia and join them in Atlanta in the first week of December. The Crimson Tide is returning the former Heisman winner Bryce Young at quarterback, and also has one of the nations top running backs in Jahmyr Gibbs as well as the best defensive player in college football in Will Anderson.

The only competitor Alabama has in the west are the Texas A&M Aggies who have a top recruiting class and a stellar defense. However, I do not think Texas A&M has the offensive firepower to keep up with the Crimson Tide.

In the Big Ten, Ohio State is pretty much a lock to win the conference. Quarterback CJ Stroud is many analysts’ pick to win the 2022-23 Heisman Trophy. The Buckeyes are sure to have stellar weapons like wide receiver Jaxon Smith-Njigba and running back Treveyon Henderson. With the firepower that the Buckeyes possess, I see them easily making their fifth College Football Playoff appearance since 2015.

A team that I think could make some noise and be in the College Football Playoff conversation is the USC Trojans. It was a historic offseason for the Trojans as they hired one of the best offensive minds in football in Lincoln Riley. Along with Riley, former Oklahoma quarterback Caleb Williams made his way to Southern California after a freshman year where he showed his Patrick Mahomes-type potential.

The Trojans lack no weapons as they landed former Pitt wide receiver and 2021 Fred Biletnikoff winner Jordan Addison, as well as former Oklahoma wide receiver Mario Williams. Being in a weaker Pac-12 conference, I can really see the Trojans winning their conference and being in the discussion for a Playoff spot.

Now it’s time for the fun part. College football fans finally don’t have to keep themselves occupied by reading preseason polls and can just kick back for the next four months and enjoy the beautiful pageantry of college football.