Bearcats to Take on Bulldogs on Youth Night at Home 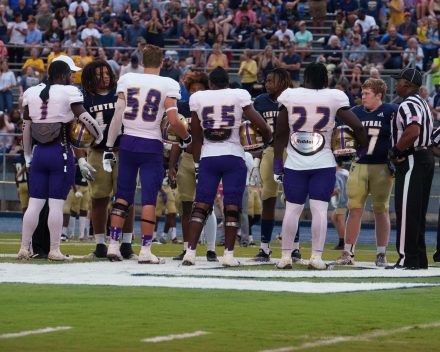 After earning their first win last week against Coffee, the Bainbridge Bearcats fell in their first road game of the season, losing 35-14 to Thomasville County Central high school. Although it was a tough night on the scoreboard for the Bearcats, they showed plenty of toughness and grit.

The first quarter started off on a good foot for the Bearcats as their defense forced multiple three and outs, giving the ball to quarterback Cam Sanders and the offense. The offense dominated the time of possession in the first quarter, with their longest drive being over six minutes.

As the offense picked up a few first downs on option runs by Cam Sanders, Antavious Murphy and Travious Freeman, the Bearcats drive stalled and were forced to punt. A punt block by TCC not only set the Yellowjackets up inside the 15 yard-line, but also shifted the momentum.

A quick touchdown gave the Yellowjackets a 7-0 lead and they never looked back. Yellowjackets quarterback Sammy Brown alongside running back Ricky Fulton and wide receiver Tyler Floyd all pitched in touchdowns as they continue to add to a historic three-game stretch.

The Bearcats did show flashes of life in the second half as Antavious Murphy took a 41-yard screen to the end zone, putting the Bearcats on the board at the end of the third quarter.

Bearcats special teams had a terrific game causing two forth quarter turnovers. The biggest came with just over four minutes left as linebacker Dontavious Broadnax shot the gap and blocked a punt and then picked up the ball and ran it into the end zone to make the score 35-14.

After the game Head Coach Jeff Littleton gave his praises to the 2022 Yellowjackets and emphasized the importance of playing a clean game for four quarters.

“That’s a terrific team we just faced in TCC. There is a lot of talent over there and we knew we were going to be tested,” said Littleton. “We have to coach better and play better but I’m excited to learn from tonight.”

Although the stats sheet wasn’t filled up by the Bearcat offense, quarterback Cam Senders not only was able to move the ball and pick up first downs, but showed a lot of toughness which is something that the Bearcat coaching staff looks for from their players.

“Cam stayed gritty and played tough,” said Littleton. “He made some great plays at times and also made some mistakes at times but that’s expected. I’m mostly proud of the fact that he played tough and never gave up.”

This week the Bearcats return home as they will take on Thomasville High School at Centennial Field. The Bulldogs recorded their first win against Cairo on Friday night as both teams come into Friday’s matchup at 1-2 as they look to reach .500 going into week five.

After a 13-win season in 2021, the Bulldogs are going through a transition as they come into 2022 with a new head coach and a new quarterback in freshman Camren Hill. That being said, the Bulldogs have plenty of talent and have shown improvement each week with playmakers like Jay Randall and DJ Thurman.

Bearcat fans will be sure to fill Centennial Field on Friday night as the Decatur County Recreation Authority celebrates youth night, granting free admission to youth players who show up in uniform. Kickoff is at 7:30 p.m.