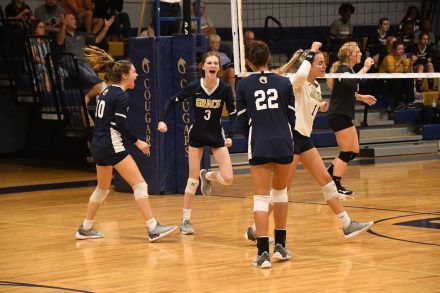 FINISH IT: Mallorie Jordan (#3) celebrates a first set victory against Colquitt County as the Lady Cougars earn their fourth win of the season.

The Grace Christian Academy volleyball team had the opportunity to play in front of their fans for the first time this season last week as they took on Colquitt County High School. The Lady Cougars made the most of the beginning of their home stand as they took down Colquitt County in four sets to earn their fourth win of the season

After falling to Colquitt County earlier in the season, head coach Kelsey Harrell wanted her team to play with an identity and a chip on their shoulder.

“I just wanted us to go out there and play free and play our game,” said Harrell. “In the locker room before the game I told them that Colquitt came ready to play and that it’s going to be an easy win. I wanted our girls to play with a chip on their shoulder.”

The Lady Cougars came out and played aggressive from the start, both offensively and defensively, taking home the first two sets. What coach Harrell was most impressed with was the heart that her team showed.

“The things we did in the game weren’t necessarily things you practice,” said Harrell. “It was the mentality we played with. We were doing things like going after balls, keeping the plays alive and just being tough. We went into the game with the mindset that we were going to win.”

The turning point of the game came in the third set. Despite the Lady Cougars falling behind and eventually losing the third set, they put together a nine to two run to end the set and gave them momentum heading into the fourth set which they dominated 25-15.

The Lady Cougars had players like sophomore Savannah McConnell and senior Mallorie Jordan really lead the team not only with their play, but with their vocal leadership skills.

“Savannah is only a sophomore but she is one of our most athletic players and our spark plug,” said Harrell. “Her energy and mentality is really special. I always tell the team the importance of being a spark because one spark can light a fire.”

Senior Mallorie Jordan had one of her best games as a Lady Cougar, filling the stat sheet with 12 kills. McConnell also had some impressive numbers as she recorded 28 digs as well as sophomore Sybil Lee who led the team with 19 assists.

“Mallorie played one of the best games I’ve ever seen her play,” said Harrell. “The overall team effort was the best we’ve had all season. Even the girls after the game realized how well they could play. This game was a huge turning point and really showed our girls the importance of finishing.”