Bearcats set to travel to Thomasville after Friday’s win 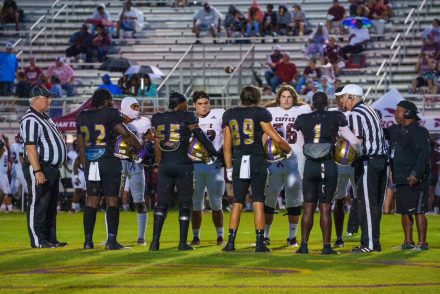 After the Bainbridge Bearcats thrilling 24-21 win against the Coffee Trojans on Friday night, the Bearcats will now look to their first road trip of the year as they head to Thomasville to take on Thomas County Central.

Thomas County Central comes into Friday’s game undefeated at 2-0 as they took down Thomasville High School 31-0 last Friday. The Bearcats will be tasked with stopping Yellowjackets quarterback Samuel Brown and wide receiver Adam Hopkins who have accumulated for much of the scoring on the Yellowjacket offense.

Head coach Jeff Littleton was most pleased with the way his team responded in their win and wants to continue to build off Friday nights win.

“Winning is always great but what I’m most proud of is how our team bounced back from adversity after last week,” said Littleton. “That’s why we play hard schedules is to learn from the mistakes. The kids responded. They responded to coaching and worked on the things we were negligent in.”

Friday night’s game was one for the books as it featured late game heroics, gritty defense and long offensive drives led by backup quarterback Cam Sanders after starter Bo Smith left with injury.

The game started off as a defensive battle as both teams’ defenses kept the offense in check, keeping the score at a stalemate after the first quarter. Running back Keenan Phillips was the first to break the seal as he took a 25 yard carry into the red zone and eventually pushed across a one yard score to give the Bearcats a 7-0 lead at the half.

Phillips opened the second half in a flash as he took a carry straight up the middle for a 65 yard score on the first play of the third quarter. After three quarters the Bearcats were clinging to a 17-13 lead going into crunch time.

With everyone in Centennial Field on their feet, the Bearcats responded and put together a thrilling final drive. Rushes by Keenan Phillips, Antavious Murphy and Kyler Burke set the Bearcats up inside the 15 yard line with just over 27 seconds left.

On the very next play, quarterback Cam Sanders rolled out and connected with sophomore receiver Cam Scott who made an unbelievable catch as he high pointed the ball and took it from the defender. Bearcats fans erupted as they took a 24-21 lead with 20 seconds left.

Backup Cam Sanders also stepped in and led the Bearcat offense on long, productive scoring drives. On the Bearcats scoring drives, they dominated the time of possession and their longest drive was an 11 play drive that took over seven minutes.

“Our backup quarterback was in so it limits you a little bit because you don’t put the gameplan in for the backup,” said Littleton. “We knew who we wanted to get the ball to and Cam was able to get it to our guys. On that last play that’s a tenth grader making that catch and it’s something we’ve seen him do in practice and Cam was able to get him the ball and gave him a chance and that’s what counts.

The Bearcats will travel to Thomas County Stadium and take on the Yellowjackets on Friday Sept. 2 at 7:30 p.m.