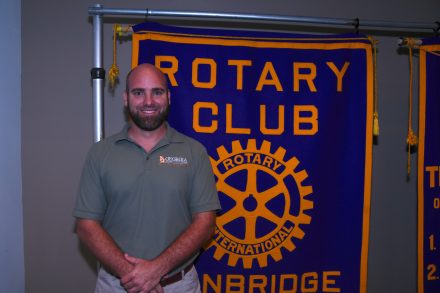 Members of the Bainbridge Rotary Club met at the Kirbo Center on Tuesday for their weekly meeting. This week’s speaker was Jonathon Pritchard, DNR fisheries manager at Silver Lake Wildlife Management Area.

Pritchard began by discussing the history of the WMA, starting with the land’s purchase around the turn of the century. “It was purchased by John R. Donaldson in 1902, that tract was. Then there was a 32,000-acre tract that was purchased by H.P. Metcalf in 1937,” he said. “Now it was 32,000 acres, for $200,000… super, super cheap land back then.” Much of the land would then go on to be sold to a subsidiary of the International Paper Company in 1947, who eventually installed a research station dedicated to selective tree breeding and genetics.

The state of Georgia went on to purchase 9,400 acres of the property in 2007, which became what is now known as Silver Lake Wildlife Management Area. When the property was first designated a WMA, funding and positions were only set aside for managing terrestrial game species; it wasn’t until 2015-2016 that funds were set aside for managing fisheries. “Anyone who is a hunter or angler, you might remember that the license fees increased around 2015-2016. Well that extra money that came from the license fee increase actually created a budget for fisheries, and a position for a fisheries technician on the property,” Pritchard explained.

Pritchard went on to show the size of the WMA, specifically how much area the ponds and lakes take up, before going into specifically which species of fish inhabit each pond; examples include the main Silver Lake, home to bass, bluegill, black crappie, and channel catfish, while Panic Pond is specifically stocked and maintained to grow trophy bass.

“The goal behind Panic Pond is to put a small number of fish in there and pump them full of forage food. All those small fish we pump in there, they get gobbled up just as quick as we can put them in there,” Pritchard elaborated. All the bass kept in Panic Pond are female, in order to encourage growth: “The goal behind that is, all females, obviously they don’t reproduce. They will have eggs, they will become engorged with eggs, but they don’t spawn… all that biomass that turns into egg production during the spring, all those eggs get reabsorbed into the body, and it turns into body mass.”

The session concluded with Pritchard taking questions from the audience.