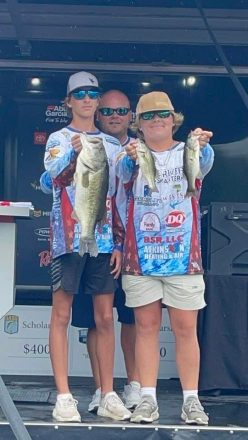 DYNAMIC DUO: Reynolds and Logue show off their catches from day 2 of the JR Bass National Chamiponships in front of the Tennesee crowd.

Bainbridge natives Hayden Reynolds and Caleb Logue have been fishing together since they were in fifth grade and have become one of the most dominant fishing duos at the junior high level. Most recently, the pair competed in the Junior High School Bass National Fishing Tournament in Tennessee where they put up another strong showing.

Reynolds and Logue finished sixth overall among 65 teams with a total weight of 14 pounds and 11 ounces. Their biggest catch came on the second day of the tournament when Logue reeled in a bass over six pounds.

The boys were most thrilled about that catch and exhausted by the work it took to reel it in.

“Once I casted it, I immediately hooked,” said Logue. “For a second everyone thought I had hooked a stump but I knew it was our biggest catch yet. It felt like I fought that fish for an hour. We finally got him close and right when he jumped Hayden got him with the net. It was the best feeling in the world.”

After a long first day, the catch not only lifted their spirits but their scores. After finishing the first day around 20th place, their biggest catch launched them into the top ten where they finished in sixth place. This was one of the most competitive tournaments the duo has competed in, as the difference of scores among the top 15 teams were slim.

“We finished the day with around nine pounds which put our total a little over 14,” said Reynolds. “We ended up finishing in sixth but if we would’ve caught a fish that weighed three pounds 11 ounces, we would’ve won. From 11th place to mid-30’s was only a pound apart so it was super close.”

The group gained not only experience and new skills from this tournament, but also a new way of fishing that they can bring into their high school career. One specific thing they learned was fishing near brush piles and sticks.

“Finding brush piles was something we learned that we’re not really used to,” said Reynolds. “We don’t really do that, we usually stick to grass. Finding brush piles and fishing in deeper waters is really going to help us and give us an advantage as we head into high school.”

After an up and down year in 2022, the pair gained confidence as they head into high school by not only being selected to compete in the national championships, but also performing well and placing in the top ten.

“It sets a great standard for us as we begin to go into the next stage of fishing and our lives,” said Logue. “We’ve always wanted to go to nationals and go to state and perform well. We finally got that chance this year and we put our heads down and grinded for it.”

Competing in the Junior National Championship was a dream come tru for Reynolds and Logue, but hearing their name called and being up on stage on the last day was an especially surreal moment for the pair.

“When you’re sitting in the bag line and everyone is around you and you hear your name called and you walk up there and everybody has their eyes on you is one of the coolest feelings,” said Reynolds. “Knowing that people from across the country see what we catch and know our names is a great feeling and it makes us want to go even harder.”

Expectations and goals for the pair are high as they head into high school, but they know that they can compete with anyone. One specific goal the group has is winning Angler of the Year.

“Ever since we started in fifth grade we always have tried to shoot for angler of the year and we got it a few times,” said Logue. “But really it’s just all about consistency and competition.”

Next for the duo is high school but ultimately, the boys look to earn a scholarship to compete at the collegiate level and one day earn a living off of competitive bass fishing.